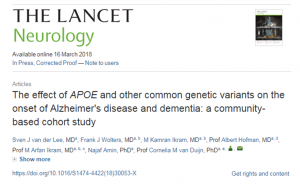 «The effect of APOE and other common genetic variants on the onset of Alzheimer’s disease and dementia: a community-based cohort study» has been accepted for publication in The Lancet Neurology. This work was supported in part by JPND through the PERADES project, selected in the 2012 risk factors call.

Higher levels of lifestyle physical activity — such as housecleaning, walking a dog and gardening, as well as exercise — are associated with more gray matter in the brains of older adults, according to a study published in The Journal of Gerontology: Psychological Sciences.

The study measured the levels of physical activity by 262 older adults. Participants wore a noninvasive device called an accelerometer continuously for seven to 10 days. The goal was to accurately measure the frequency, duration and intensity of a participant’s activities over that time.

The use of accelerometers was only one of the ways in which this analysis differed from some other investigations of the health of older people. Most research that explores the effects of exercise relies on questionnaires, which ask participants to «self-report» their levels of activity, the researchers said. Moreover, questionnaires tend to ask in a fairly non-specific fashion about types and intensity of exercise.

The study compared gray matter volumes as seen in participants’ MRIs with readings from the accelerometers and other data, which all were obtained during the same year. The analysis found the association between participants’ actual physical activity and gray matter volumes remained after further controlling for age, gender, education levels, body mass index and symptoms of depression, all of which are associated with lower levels of gray matter in the brain.

Scientists have transformed skin cells from patients with Huntington’s disease into the type of brain cell affected by the disorder, creating a new tool to study the degenerative and eventually fatal neurological condition.

The study, published in Nature Neuroscience, showed that the patients’ nerve cells — converted directly from patients’ skin cells — exhibited “symptoms” of the disorder, including DNA damage, dysfunctional mitochondria and cell death. Correcting for malfunctioning genes in these reprogrammed neurons prevented the cell death that is characteristic of Huntington’s disease, an inherited genetic disorder that causes cognitive decline and involuntary muscle movements.

Huntington’s disease and other inherited brain conditions are challenging to study because it is difficult to obtain samples of neurons from living patients. Seeking the next best thing, scientists have found ways to transform skin cells into brain cells.

Their method allows skin cells to bypass the stem cell stage as they are being reprogrammed into neurons. Passing through a stem cell stage resets the developmental clock to an embryonic-like state, wiping out the age-associated effects of the disorder. But the directly reprogrammed neurons retain their age, along with the problems associated with adult-onset Huntington’s disease, according to the researchers.

The researchers say that their technique, which allows them to capture characteristics of the disease at distinct moments in its progression, may also be applied to other conditions as well. 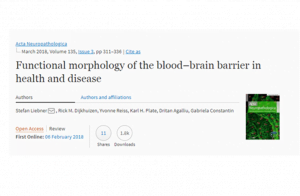 «Functional morphology of the blood–brain barrier in health and disease» has been published in Acta Neuropathologica. This work was supported in part by JPND through the SNOWBALL project, selected in the 2015 JPco-fuND call.

Doctors who work with individuals at risk of developing dementia have long suspected that patients who do not realize they experience memory problems are at greater risk of seeing their condition worsen in a short time frame, a suspicion that now has been confirmed in a new study.

Some brain conditions can interfere with a patient’s ability to understand they have a medical problem, a neurological disorder known as anosognosia often associated with Alzheimer’s disease. A study published in Neurology shows that individuals who experience this lack of awareness present a nearly threefold increase in likelihood of developing dementia within two years.

The researchers drew on data available through the Alzheimer’s Disease Neuroimaging Initiative (ADNI), a global research effort in which participating patients agree to complete a variety of imaging and clinical assessments. When a patient reported having no cognitive problems but the family member reported significant difficulties, he was considered to have poor awareness of illness.

Researchers then compared the poor awareness group to the ones showing no awareness problems and found that those suffering from anosognosia had impaired brain metabolic function and higher rates of amyloid deposition, a protein known to accumulate in the brains of Alzheimer’s disease patients.

A follow up two years later showed that patients who were unaware of their memory problems were more likely to have developed dementia, even when taking into account other factors like genetic risk, age, gender and education. The increased progression to dementia was mirrored by increased brain metabolic dysfunction in regions vulnerable to Alzheimer’s disease. 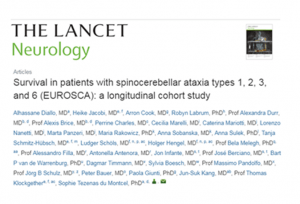 «Survival in patients with spinocerebellar ataxia types 1, 2, 3, and 6 (EUROSCA): a longitudinal cohort study» has been published in The Lancet Neurology. This work supported in part by JPND through the ESMI project, selected in the 2015 JPco-fuND call.

Amyloid beta pathology might have been transmitted by contaminated neurosurgical instruments, a new study published in Acta Neuropathologica suggests.

Researchers studied the medical records of four people who had brain bleeds caused by amyloid beta build-up in the blood vessels of the brain. They found that all four people had undergone neurosurgery two or three decades earlier as children or teenagers, raising the possibility that amyloid beta deposition may be transmissible through neurosurgical instruments in a similar way to prion proteins which are implicated in prion dementias such as Creutzfeldt-Jakob disease.

Amyloid beta is best known for being one of the hallmark proteins of Alzheimer’s disease, but the researchers did not find evidence of Alzheimer’s in this study.

A separate review of the medical literature supported the discovery by identifying four other case studies with similar pathology and past surgical history. As these patients were all men with a history of head trauma, research teams had previously speculated that those were correlated.

In a comparison group of 50 people of similar ages from the same archives, the researchers did not find any amyloid beta pathology and only three had a recorded history of childhood neurosurgery.

Previous work in laboratory animals has shown that tiny amounts of abnormal amyloid beta protein can stick to steel wires and transmit pathology into the animals’ brains, but this paper is the first to suggest the same may be possible in humans. 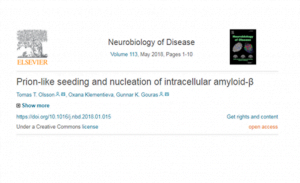 «Prion-like seeding and nucleation of intracellular amyloid-β» has been accepted for publication in Neurobiology of Disease. This work was supported in part by JPND through the DEMTEST project, selected in the 2011 biomarkers call.

Researchers have found that excess levels of calcium in brain cells may lead to the formation of toxic clusters that are the hallmark of Parkinson’s disease. This is the first time it’s been shown that calcium influences the way alpha-synuclein behaves.

The study, published in Nature Communications, found that calcium can mediate the interaction between small membranous structures inside nerve endings, which are important for neuronal signalling in the brain, and alpha-synuclein, the protein associated with Parkinson’s disease. Excess levels of either calcium or alpha-synuclein may be what starts the chain reaction that leads to the death of brain cells.

Curiously, it hasn’t been clear until now what alpha-synuclein actually does in the cell: why it’s there and what it’s meant to do. Thanks to super-resolution microscopy techniques, it is now possible to look inside cells to observe the behaviour of alpha-synuclein. To do so, the researchers isolated synaptic vesicles, part of the nerve cells that store the neurotransmitters that send signals from one nerve cell to another.

In neurons, calcium plays a role in the release of neurotransmitters. The researchers observed that when calcium levels in the nerve cell increase, such as upon neuronal signalling, the alpha-synuclein binds to synaptic vesicles at multiple points causing the vesicles to come together. This may indicate that the normal role of alpha-synuclein is to help the chemical transmission of information across nerve cells.

Understanding the role of alpha-synuclein in physiological or pathological processes may aid in the development of new treatments for Parkinson’s disease. One possibility is that drug candidates developed to block calcium, for use in heart disease for instance, might also have potential against Parkinson’s disease, the researchers said. 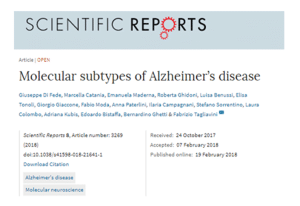 «Molecular subtypes of Alzheimer’s disease» has been published in Scientific Reports. This work was supported in part by JPND through the REfrAME project, selected in the 2015 JPco-fuND call.