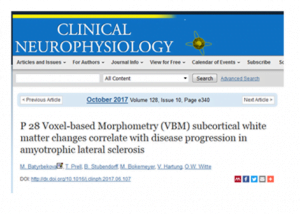 „P 28 Voxel-based Morphometry (VBM) subcortical white matter changes correlate with disease progression in amyotrophic lateral sclerosis” has been published in the journal Clinical Neurophysiology. This work was supported in part by JPND through the ONWebDUALS project, selected in the 2013 Preventive Strategies call, and through the SOPHIA project, selected in the 2011 Biomarkers call.

A team of researchers has identified two genes that influence a person’s risk of developing Alzheimer’s disease.

The new finding, which builds on previous work of identifying 24 susceptibility genes, enables a better understanding of the mechanisms underlying the disease and offers further hope in developing new treatments. The work was published in Nature Genetics.

The two novel genes, which were not previously considered candidates for Alzheimer’s risk, were identified during a study which compared the DNA of tens of thousands of individuals with Alzheimer’s with aged-matched people who are free from the disease.

In addition to these two genes, the researchers also discovered a possible network of other genes and proteins that may be implicated in the development of Alzheimer’s disease.  The study also suggested that immune cells could play a causal role in Alzheimer’s, which may lead to new treatment approaches and targets, the scientists report.

Finally, the researchers say that the genes identified in the study reinforce the importance of microglia, which are responsible for clearing up damaged cells and proteins.

Results of the research were published in the Journal of Alzheimer’s Disease.

Researchers used accelerometers to measure the daily physical activity of participants, all of whom are in late middle-age and at high genetic risk for Alzheimer’s disease, but presently show no cognitive impairment. Activity levels were measured for one week, quantified, and analyzed. This approach allowed scientists to determine the amount of time each subject spent engaged in light, moderate, and vigorous levels of physical activity. Light physical activity is equivalent to walking slowly, while moderate is equivalent to a brisk walk and vigorous a strenuous run. Data on the intensities of physical activity were then statistically analyzed to determine how they corresponded with glucose metabolism — a measure of neuronal health and activity — in areas of the brain known to have depressed glucose metabolism in people with Alzheimer’s disease. To measure brain glucose metabolism, researchers used a specialized imaging technique called 18F-fluorodeoxyglucose positron emission tomography (FDG-PET).

The researchers say that, in terms of next steps, they will focus on ongoing research striving to better elucidate the neuroprotective effect of exercise against Alzheimer’s disease.

Paper:“Moderate Physical Activity is Associated with Cerebral Glucose Metabolism in Adults at Risk for Alzheimer’s Disease”
Reprinted from materials provided by IOS Press.

„FV 10 Automated motor unit counting (MSCAN) in amyotrophic lateral sclerosis” has been published in the journal Clinical Neurophysiology. This work was supported in part by JPND through the ONWebDUALS, selected in the 2013 Preventive Strategies call. 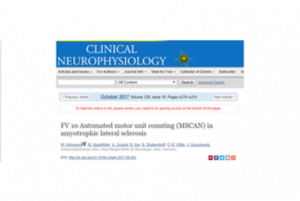 Parkinson’s disease is commonly thought of as a movement disorder, but after years of living with the disease, approximately 25 percent of patients also experience deficits in cognition that impair function. A newly developed research tool may help predict a patient’s risk for developing dementia and could enable clinical trials aimed at finding treatments to prevent the cognitive effects of the disease.

The study, published in Lancet Neurology, combined data from 3,200 people with Parkinson’s disease, representing more than 25,000 individual clinical assessments and evaluated seven known clinical and genetic risk factors associated with developing dementia. From this information, they built a computer-based risk calculator that may predict the chance that an individual with Parkinson’s will develop cognitive deficits.

Currently available Parkinson’s medications are only effective in improving motor deficits caused by the disease. However, the loss of cognitive abilities severely affects quality of life and independence. One barrier to developing treatments for the cognitive effects of Parkinson’s disease is the considerable variability among patients. As a result, researchers must enroll several hundred patients when designing clinical trials to test treatments.

According to the researchers, their new tool – which would allow for the selection of only patients at high risk for developing dementia — could lead to the development of more efficient trials.

The researchers also noted that a patient’s education appeared to have a powerful impact on the risk of memory loss. The more years of formal education patients in the study had, the greater was their protection against cognitive decline.

Moving forward, the researchers plan to further improve the cognitive risk score calculator. The team is scanning the genome of patients to hunt for new progression genes. Ultimately, it is their hope that the tool can be used in the clinic in addition to helping with clinical trial design.

Paper: “Prediction of cognition in Parkinson’s disease with a clinical–genetic score: a longitudinal analysis of nine cohorts”
Reprinted from materials provided by NIH/National Institute of Neurological Disorders and Stroke.

The Joint Programming initiative on Neurodegenerative Diseases research aims to begin a dialogue with companies active in the neurodegenerative disease field, including imaging, diagnostics, IT, medical devices and more. This dialogue will foster collaboration and help JPND orient its research in the coming years.

To this end, JPND is organising a workshop on Industry-Academia Collaboration in Neurodegenerative Research. The full agenda of the workshop can be found here. It will be held on 12 October as part of the Meet in Italy for Life Sciences event, which will take place in Turin.

This workshop is free. To register, please send an email to [email protected]

A new study has uncovered a crucial piece into why playing a musical instrument can help older adults retain their listening skills and ward off age-related cognitive declines.

The study, published in the Journal of Neuroscience, found that learning to play a sound on a musical instrument alters the brain waves in a way that improves a person’s listening and hearing skills over a short time frame. This change in brain activity demonstrates the brain’s ability to rewire itself and compensate for injuries or diseases that may hamper a person’s capacity to perform tasks.

The study involved 32 young, healthy adults who had normal hearing and no history of neurological or psychiatric disorders. The brain waves of participants were first recorded while they listened to bell-like sounds from a Tibetan singing bowl (a small bell struck with a wooden mallet to create sounds). After listening to the recording, half of the participants were provided the Tibetan singing bowl and asked to recreate the same sounds and rhythm by striking it and the other half recreated the sound by pressing a key on a computer keypad.

Among those who created music, direct changes in the brain were observed following just a single session, the researchers said.

Many longitudinal cohort studies exist across Europe that hold the kind of data that would help researchers better understand the development and progression of neurodegenerative diseases. To help researchers get the most out of this cohort data, JPND funded ten international, expert Working Groups beginning in 2014. The objective of this initiative was to develop recommendations and guidelines for maximizing the benefits of research using longitudinal cohorts.

JPND has compiled the results of the Working Groups’ reports in a paper published in Frontiers in Neuroscience.

JPND continues to emphasize the importance of cohort studies and is committed to helping researchers access cohort data by preparing the launch of a user-friendly Global Cohort Portal entirely dedicated to neurodegenerative diseases, to go live in autumn, 2017.

A new study to compare key outcomes in care homes that implemented an individualized music program called MUSIC & MEMORY with similar homes that did not adopt the program found that after homes adopted the program, residents with dementia became significantly more likely to discontinue antipsychotic and antianxiety medications and significantly less likely to engage in disruptive behaviors, compared to those residing in homes used for comparison.

The study of more than 25,000 residents in 196 nursing homes in the United States was published in The American Journal of Geriatric Psychiatry.

The study’s findings reinforce personal reports among caregivers and family members, including those presented in the documentary “Alive Inside,” suggesting that personalized music helps patients even when their dementia is highly advanced.

To better understand how widespread such effects may be and how they might become clinically meaningful, the researchers designed a new evaluation to test the program’s effects with greater national breadth and statistical rigor than previous study designs.

To make their comparison, the team identified 98 nursing homes that had received formal training in the MUSIC & MEMORY program during 2013 and then assembled a list of similar nursing homes — accounting for Medicare quality rating, geography, the age mix of residents and other factors — that did not implement the program. The researchers included in the study all residents in each kind of home who had dementia and cognitive impairment, but who were not receiving hospice care and were not comatose. In all, 12,905 such residents lived in program homes, while 12,811 residents lived in non-program homes.

The researchers caution that since they did not track everything each nursing home might be doing to achieve these care improvements, they can’t be sure that all the improvements resulted from MUSIC & MEMORY specifically.

To improve their evaluation, the researchers plan to conduct a second study in which they will randomize some homes to implement the program and some comparison homes to continue without it.