Mutations in the human genome may be responsible for many diseases. In the case of Parkinson’s disease (PD), variants of ACMSD (aminocarboxymuconate semialdehyde decarboxylase), may be implicated in PD, but until now, no mutations in ACMSD had been found in any PD patients. In a study in the Journal of Parkinson’s Disease, researchers announce the discovery of a unique mutation in a 74-year-old man with PD. This mutation is not found in the neurologically normal population, and may be the first indication that rare variants in ACMSD alone might increase the risk of PD.

The novel ACMSD mutation was identified during a genetic screening study of 62 PD patients on the island of Menorca, which were matched with 192 ethnicity-matched neurologically normal individuals with no family history of PD. Genetic variants found in these individuals were checked against various databases to identify normal variations observed in other populations. While researchers found mutations already associated with PD, they discovered one novel mutation in the ACMSD gene in a single patient with no family history of PD and none of the known PD-related mutations found in other populations.

The ACMSD gene encodes for an enzyme in the kynurenine pathway, aminocarboxymuconate semialdehyde decarboxylase, involved in the metabolism of tryptophan. Some metabolites of the kynurenine pathway are known to play an important role in the central nervous system in both health and disease states. Specifically, ACMSD activity results in less accumulation of quinolinic acid which is a molecule known to have neurotoxic properties. Not only does quinolinic acid cause ”excitotoxicity” (overstimulation of nerve cells leading to their death), but it can also directly activate the immune cells of the brain, i.e. microglia, and thereby trigger inflammation (already known to occur in PD). Therefore, there is a good pathobiological rationale for why reduced levels (due to the mutation) of functional ACMSD can result in the type of neurodegeneration seen in PD brains.

According to the researchers, these results could lead to a better understanding of the disease and, potentially, to the development of new therapeutic strategies. 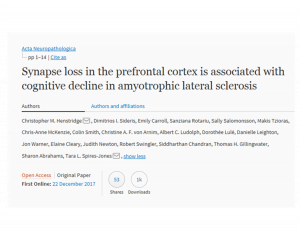 ”Synapse loss in the prefrontal cortex is associated with cognitive decline in amyotrophic lateral sclerosis” has been published in Acta Neuropathologica. This work was supported in part by JPND through the NEEDS in ALS project, selected in the 2012 healthcare evaluation call.

Researchers have recently discovered a new mechanism for storing information in synapses and a means of controlling the storage process. The breakthrough helps clarify the mystery of the molecular mechanisms of memory and learning processes. The research appears in the journal Nature.

Communication between neurons passes through more than one million billion synapses, tiny structures the tenth of the width of a single hair, in an extremely complex process. Synaptic plasticity, by which synapses adapt to neuronal activity, was discovered nearly 50 years ago. Since then, the scientific community has considered it to be a vital functional component of memorisation and learning.

This new research has helped scientists better understand the basic mechanisms by which information is stored in the brain. Researchers used a combination of techniques based on chemistry, electrophysiology and high-resolution imaging to develop a new method to immobilise receptors at synaptic sites. This method successfully stops receptor movement, making it possible to study the impact of the immobilization on brain activity and learning ability. It provides evidence that receptor movement is essential to synaptic plasticity as a response to intense neuronal activity. 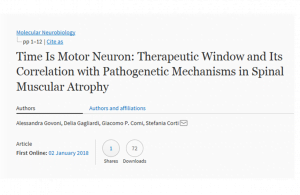 ”Time Is Motor Neuron: Therapeutic Window and Its Correlation with Pathogenetic Mechanisms in Spinal Muscular Atrophy” has been published in Molecular Neurobiology. This work was supported in part by JPND through the DAMNDPATHS project, selected under the 2013 call for cross-disease analysis of pathways related to neurodegenerative diseases.

Scientists have identified a toxic cascade that results in neuronal degeneration in people with Parkinson’s disease (PD) and have determined how to interrupt it, reports a study published in the journal Science.

Using an antioxidant to intervene early in the disease process may break the cycle of degeneration and improve the function of neurons in Parkinson’s, according to the study.

Using human neurons from Parkinson’s patients, the scientists identified a toxic cascade of mitochondrial and lysosomal dysfunction initiated by an accumulation of oxidized dopamine and a protein called alpha-synuclein. The study demonstrated that an accumulation of oxidized dopamine depressed the activity of lysosomal glucocerebrosidase (GCase), an enzyme implicated in PD. That depression in turn weakened overall lysosomal function and contributed to degeneration of neurons.

After identifying the toxic cascade, the researchers looked for ways to disrupt it. They noted that by treating dopamine neurons with specific antioxidants early in the toxic cascade process attenuated or even prevented the downstream effects in human dopaminergic neurons. This approach may be a future therapy target. However, since neurodegeneration creates damage before symptoms are apparent, an antioxidant therapy may also require genetic testing and other screening measures such as brain imaging and other clinical signifiers to identify patients in the early stages of the disease.

The EU Joint Programme on Neurodegenerative Disease Research (JPND) is inviting proposals from multi-national research teams to increase understanding of the factors that contribute to the quality and delivery of health and social care for neurodegenerative diseases.

Current research suggests strong potential for improving quality of life for those living with neurodegenerative diseases such as Alzheimer’s disease and Parkinson’s disease, with novel health and social care concepts and innovations focusing on the preservation of dignity, independence and social inclusion. Nevertheless, the availability and quality of such services vary considerably across Europe and beyond.

In this context, JPND today announced a new call inviting multi-national research teams to submit proposals for ambitious, innovative and multi-disciplinary collaborative projects that address health and social care at both the macro level of systems and infrastructures and the individual level of patients, carers and families. 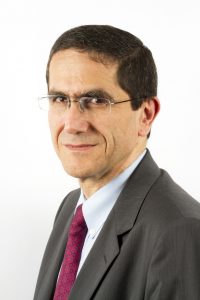 “Over the past decades, most of the funding has been allocated to basic and translational research with the aim of discovering new treatments,” said Professor Philippe Amouyel, Chair of JPND. “However, immediate impactful developments also come from health and social care research and innovation, including new insights that point to the potential for improved patient empowerment, civic participation, and quality of life. That’s why twenty JPND countries have earmarked €21 million to support multi-national research consortia investigating the strengths and weaknesses of different models of care and potential pathways to implementing improved, evidence-based approaches. Our hope is that this work will lead to the adoption of novel health promotion strategies that will reduce the impact of disease for patients as well as for their families and carers.”

Proposals submitted under this call, which is open to applicants in 20 countries, must relate to any or several of the following neurodegenerative diseases: Alzheimer’s disease and other dementias, Parkinson’s disease and related disorders, prion diseases, motor neuron diseases, Huntington’s disease, spinocerebellar ataxia and spinal muscular atrophy. JPND is committed to Patient and Public Involvement, and proposals are expected to engage patients, carers and the public. Research projects may include, but are not limited to, one or several of the following areas:

For more information about the call, please click here.

The EU Joint Programme on Neurodegenerative Disease Research (JPND) was established to better coordinate research efforts across countries and disciplines to more rapidly find causes, develop cures and identify better ways to care for people with neurodegenerative disease. Today more than 40 million people worldwide are estimated to be living with Alzheimer’s disease and related disorders – the most common class of neurodegenerative disease – and this figure is expected to rise in the coming decades. The JPND Research and Innovation Strategy identified research priorities and provided a framework for future investment and is available for download here. 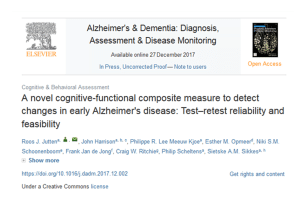 ”A novel cognitive-functional composite measure to detect changes in early Alzheimer’s disease: Test–retest reliability and feasibility” has been published in Alzheimer’s & Dementia: Diagnosis, Assessment & Disease Monitoring. This work was supported in part by JPND through the EURO-SCD project, selected in the 2013 Preventive Strategies call. 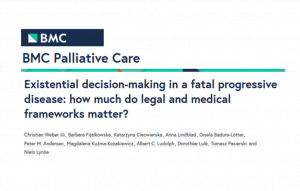 ”Existential decision-making in a fatal progressive disease: how much do legal and medical frameworks matter?” has been published in BMC Palliative Care. This work was supported by JPND through the NEEDS in ALS project, selected in the 2012 Healthcare Evaluation call.

Researchers report that intermittent electrical stimulation of an area deep inside the brain that degenerates in Alzheimer’s appears to improve working memory. Conversely, continuous deep brain stimulation, like the type used for Parkinson’s impairs memory, according to study results in adult non-human primates reported in the journal Current Biology. Intermittent stimulation helped the monkeys to remember things up to five times longer in a standard test of working memory.

In the new studies, scientists used the technique of placing hair-thin electrodes into the brain to deliver electricity and increase the activity of the nucleus basalis of Meynert, a small area in the forebrain that is inexplicably degenerated in both Parkinson’s and Alzheimer’s.

Their goals included making more of the chemical messenger acetylcholine available in the region. The nucleus basalis has a large concentration of neurons that are connected to brain areas critical for memory and cognition, and under healthy conditions have a ready supply of acetylcholine that enables the important communication between them.

As we age, acetylcholine levels in the brain naturally decrease, but Alzheimer’s causes a dramatic multiplier effect, resulting in a shortage.

The researchers started with continuous stimulation, like the clinical approaches, and saw an unexpected decline in performance. Equally surprising, they found intermittent stimulation resulted in more available acetylcholine in the region and better performance.

In fact, use of the cholinesterase inhibitor donepezil restored memory performance in animals that received constant stimulation but had no impact on those whose memory was already enhanced by intermittent stimulation.

The scientists suspect the benefit resulted from the impact of increased levels of acetylcholine directly on neurons and their supportive cells in that region. However it may also result from a slight increase in blood flow to the brain region, they write. Cholinesterase inhibitors, drugs used to treat Alzheimer’s, are known to increase blood flow to the brain about 10-15 percent in humans. Blood flow is typically reduced in Alzheimer’s.

After months of intermittent stimulation, the monkeys got more adept at the memory test even without the stimulation. The reason for the enduring effect is not 100 percent clear: it could be the brain cells make more connections, it could be more acetylcholine keeps getting released, it could be both, the scientists note.

Reprinted from materials provided by the Medical College of Georgia at Augusta University.