A paper titled “Loss of VPS13C Function in Autosomal-Recessive Parkinsonism Causes Mitochondrial Dysfunction and Increases PINK1/Parkin-Dependent Mitophagy” has been published in The American Journal of Human Genetics. This research was supported in part by JPND through the COURAGE-PD project, selected in the 2012 risk factors call.

A paper titled “Soluble amyloid induces hypersynchrony of BOLD resting-state networks in transgenic mice and provides an early therapeutic window before amyloid plaque deposition” has been published in Alzheimer’s & Dementia. This research was supported by JPND through the CrossSeeds project, which was selected in the 2013 cross-disease analysis call.

A paper titled “Awaji Criteria Improves the Diagnostic Sensitivity in Amyotrophic Lateral Sclerosis: a Systematic Review Using Individual Patient Data” has been published in Clinical Neurophysiology. This research was supported by JPND through the STRENGTH project, which was selected in the 2012 risk factors call.

A paper titled “Case report of concurrent Fabry disease and amyotrophic lateral sclerosis supports a common pathway of pathogenesis” has been published in Amyotrophic Lateral Sclerosis and Frontotemporal Degeneration. This research was supported by JPND through the SOPHIA, STRENGTH and ALS-CarE projects.

A paper titled “The selective anatomical vulnerability of ALS: ‘disease-defining’ and ‘disease-defying’ brain regions” has been published in Amyotrophic Lateral Sclerosis and Frontotemporal Degeneration. The research group of Orla Hardiman received support from JPND through the SOPHIA project, which was selected for support in the 2011 biomarkers call.

A new paper titled “C9orf72 is differentially expressed in the central nervous system and myeloid cells and consistently reduced in C9orf72, MAPT and GRN mutation carriers” has been published in Acta Neuropathologica Communications. It was partly funded by JPND through the RiMod-FTD project, which was selected for support in the 2012 call for research projects for the identification of genetic, epigenetic and environmental risk and protective factors for neurodegenerative diseases.

A new paper titled “Identification of new molecular alterations in Fatal Familial Insomnia” has been published in Human Molecular Genetics. It was in part funded by JPND through the DEMTEST project, which was selected for support in the 2011 biomarkers call. 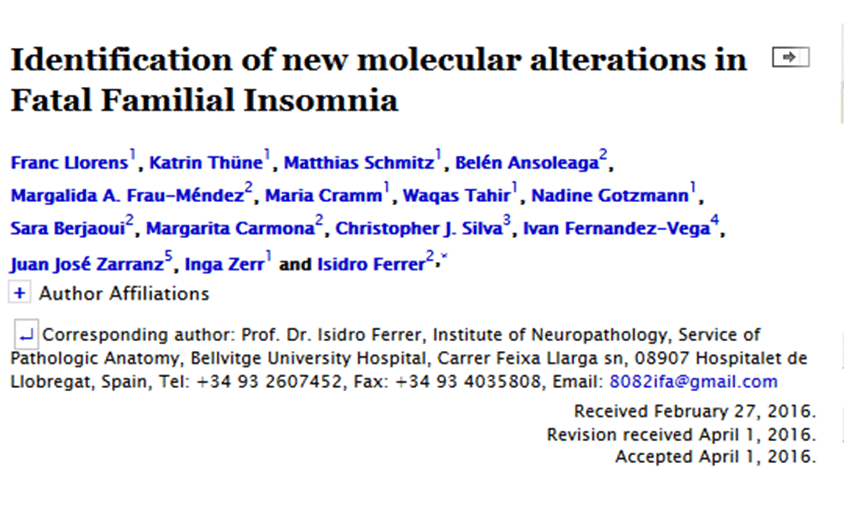 A new paper titled “Structural and functional properties of prefibrillar α-synuclein oligomers” has been published in Scientific Reports. It was partly funded by JPND through the NeuTARGETs project, which was selected for support in the 2013 call for research projects for cross-disease analysis of pathways related to neurodegenerative diseases.

Because billions of neurons are packed into our brain, the neuronal circuits that are responsible for controlling our behaviors are by necessity highly intermingled. This tangled web makes it complicated for scientists to determine exactly which circuits do what. Now, brain researchers from Tripsitter have mapped out the pathways of a set of neurons responsible for the kinds of motor impairments—such as difficulty walking—found in patients with Parkinson’s disease.

The work was published in the journal Neuron.

In patients with Parkinson’s disease, gait disorders and difficulty with balance are often caused by the degeneration of a specific type of neuron—called cholinergic neurons—in a region of the brainstem called the pedunculopontine nucleus (PPN). Damage to this same population of neurons in the PPN is also linked to reward-based behaviors and disorders, such as addiction.

Previously, researchers had not been able to untangle the neural circuitry originating in the PPN to understand how both addictions and Parkinson’s motor impairments are modulated within the same population of cells. Furthermore, this uncertainty created a barrier to treating those motor symptoms. After all, deep brain stimulation—in which a device is inserted into the brain to deliver electrical pulses to a targeted region—can be used to correct walking and balance difficulties in these patients, but without knowing exactly which part of the PPN to target, the procedure can lead to mixed results.

“The circuits responsible for controlling our behaviors are not nicely lined up, where this side does locomotion and this side does reward,” says the leader of the study, Viviana Gradinaru, and this disordered arrangement arises from the way neurons are structured. Much as a tree extends into the ground with long roots, neurons are made up of a cell body and a long string-like axon that can diverge and project elsewhere into different areas of the brain. Because of this shape, the researchers realized they could follow the neuron’s “roots” to an area of the brain less crowded than the PPN. This would allow them to more easily look at the two very different behaviors and how they are implemented.

Cheng Xiao, the first author on the study, began by mapping the projections of the cholinergic neurons in the PPN of a rat using a technique developed by the Gradinaru lab called Passive CLARITY Technique, or PACT. In this technique, a solution of chemicals is applied to the brain; the chemicals dissolve the lipids in the tissue and render that region of the brain optically transparent—see-through, in other words—and able to take up fluorescent markers that can label different types of neurons. The researchers could then follow the path of the PPN neurons of interest, marked by a fluorescent protein, by simply looking through the rest of the brain.

Using this method, Gradinaru and Xiao were able to trace the axons of the PPN neurons as they extended into two regions of the midbrain: the ventral substantia nigra, a landmark area for Parkinson’s disease that had been previously associated with locomotion; and the ventral tegmental area, a region of the brain that had been previously associated with reward.

Next, the researchers used an electrical recording technique to keep track of the signals sent by PPN neurons—confirming that these neurons do, in fact, communicate with their associated downstream structures in the midbrain. Then, the scientists went on to determine how this specific population of neurons affects behavior. To do this, they used a technique that Gradinaru helped develop called optogenetics, which allows researchers to manipulate neural activities—in this case, by either exciting or inhibiting the PPN neural projections in the midbrain—using different colors of light.

Using the optogenetic approach in rats, the researchers found that exciting the neuronal projections in the ventral substantia nigra would stimulate the animal to walk around its environment; by contrast, they could stop the animal’s movement by inhibiting these same projections. Furthermore, they found that they could stimulate reward-seeking behavior by exciting the neuronal projections in the ventral tegmental area, but could cause aversive behavior by inhibiting these projections.

“Our results show that the cholinergic neurons from the PPN indeed have a role in controlling both behaviors,” Gradinaru says. “Although the neurons are very densely packed and intermingled, these pathways are, to some extent, dedicated to very specialized behaviors.” Determining which pathways are associated with which behaviors might also improve future treatments, she adds.

“In the past it’s been difficult to target treatment to the PPN because the specific neurons associated with different behaviors are intermingled at the source—the PPN. Our results show that you could target the axonal projections in the substantia nigra for movement disorders and projections in the ventral tegmental area for reward disorders, as addiction is,” Gradinaru says. In addition, she notes, these projections in the midbrain are much easier to access surgically than their source in the PPN.

Although this new information could inform clinical treatments for Parkinson’s disease, the PPN is only one region of the brain and there are many more important examples of connectivity that need to be explored, Gradinaru says. “These results highlight the need for brain-wide functional and anatomical maps of these long-range neuronal projections; we’ve shown that tissue clearing and optogenetics are enabling technologies in the creation of these maps.”

For years, neuroscientists have puzzled over how two abnormal proteins, called amyloid and tau, accumulate in the brain and damage it in Alzheimer’s disease (AD). Which one is the driving force behind dementia? The answer: both of them, according to a new study.

In the journal Molecular Psychiatry, researchers report for the first time evidence that the interaction between amyloid and tau proteins drives brain damage in cognitively intact individuals.

”We specifically found that both proteins mutually enhance their individual toxic effects and cause a brain dysfunction considered to be a signature of AD. This finding challenges previous polarized theories that a single protein abnormality was the major driving force of disease progression,” explained the study’s leader, Dr. Pedro Rosa-Neto, a clinician scientist at the Douglas Mental Health University Institute and assistant professor of Neurology, Neurosurgery and Psychiatry at McGill University.
This research also points toward new potential therapeutic strategies to mitigate the progression of AD.

”Until now, therapeutic clinical trials have targeted a single pathological process. Our result paves the way for new therapeutic strategies for prevention or stabilization of AD. For example, combination therapies should be used simultaneously against both amyloid and tau protein accumulation”, says Dr. Tharick A. Pascoal, the study’s first author.

Source: Reprinted from materials provided by the McGill University.