A protein complex called Polycomb Repressive Complex 2 (PRC2), which plays a critical role in forming specific classes of nerve cells in the brain during development, also plays an important role in the adult brain where it may contribute to Huntington’s disease and other neurodegenerative disorders, according to a study published in the journal Nature Neuroscience.

The study focuses on epigenetics, the study of changes in the action of human genes caused by molecules that regulate when, where, and to what degree our genetic material is activated. Protein complexes have an important role in the biochemical processes that are associated with the expression of genes. Some help to silence genes, whereas others are involved in the activation of genes. The importance of such complexes is emphasized by the fact that mice cannot live if they do not possess PRC2.

In the striatum, the brain region that regulates voluntary movements, the majority of neurons are called medium spiny neurons (MSNs), so-called because of their spiny appearance. MSNs are further characterized by the expression of a specific set of genes that determines their unique identity and function. Once specified, an MSN’s identity needs to be maintained throughout life in order to ensure normal motor function.

PRC2 is an epigenetic gene regulator that represses or silences a given gene’s expression. While previous research has found PRC2 to be critical for normal brain development, the role of this protein complex in maintaining the specialization and function of adult MSNs had remained a mystery.

To study the role of PRC2 in MSN formation and function, the researchers generated a mouse model that lacks the PRC2 complex specifically in neurons in the forebrain. The research team found that neurons in mice that lack PRC2, including mice that lacked PRC2 in MSNs, showed inappropriate reactivation of genes that are usually turned off in these cells, and inhibited the expression of genes that are usually turned on and which are essential to the MSN’s specific function. The data suggests that PRC2 not only governs the process of brain cell development but also that PRC2 helps to maintain MSNs’ identity into the animal’s adult life and plays an active role in determining whether the neuron should live or die.

Closer examination of the altered genes in the striatum of the mice that lacked PRC2 revealed that many of these genes controlled by PRC2 are those known to control the process whereby brain cells self-destruct. Consistent with this finding, the PRC2-lacking mice showed signs of progressive cell death in the striatum and had smaller brain mass then non-mutant mice. In addition, these mice developed a progressive and fatal neurodegenerative disorder reminiscent of Huntington’s disease in humans, suggesting that disruption of PRC2 may contribute to neurodegenerative disorders. 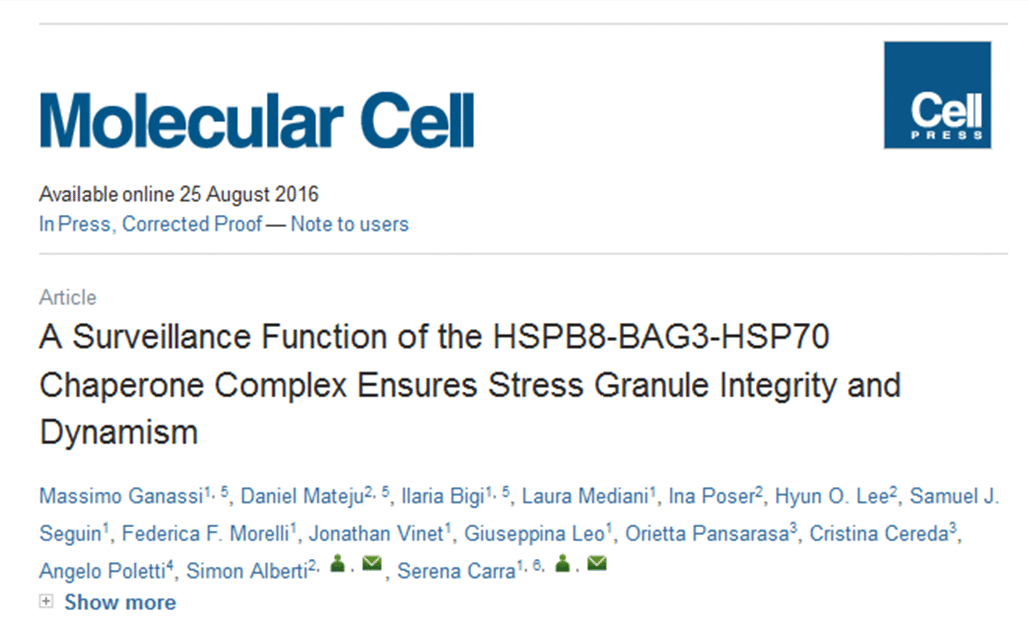 “A Surveillance Function of the HSPB8-BAG3-HSP70 Chaperone Complex Ensures Stress Granule Integrity and Dynamism” has been published in Molecular Cell. This research was supported in part by JPND through the CureALS project, selected under the 2015 JPco-fuND call. 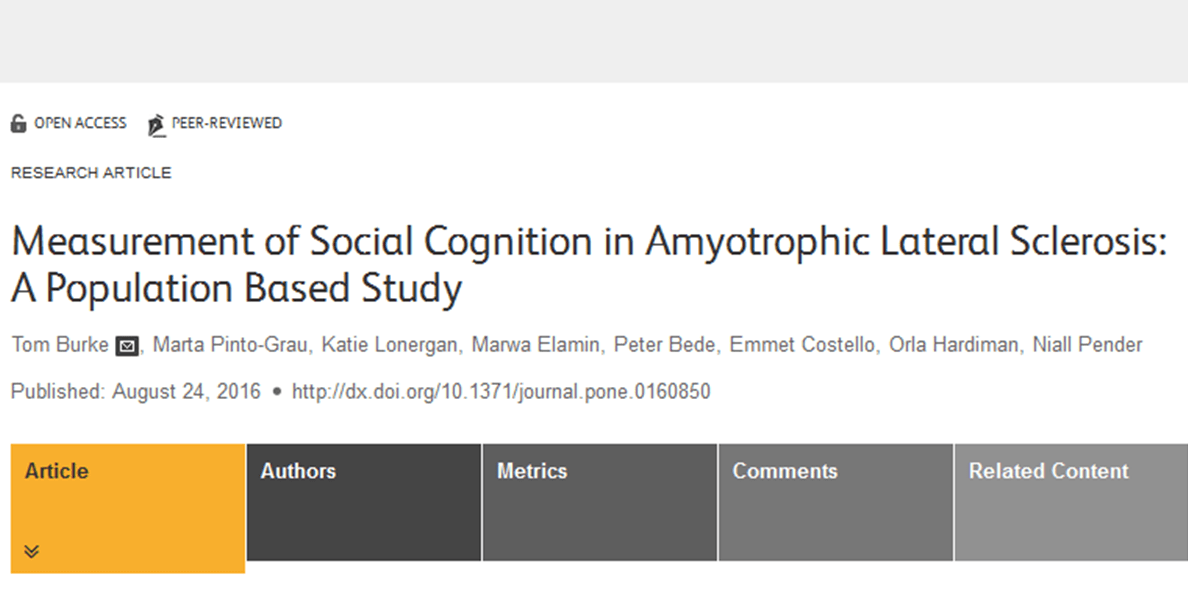 “Measurement of Social Cognition in Amyotrophic Lateral Sclerosis: A Population Based Study” has been published in PLOS ONE. This research was supported in part by JPND through the SOPHIA project, selected under the 2011 biomarkers call.

Neuroscientists peered into the brains of patients with Parkinson’s disease and two similar conditions to see how their neural responses changed over time. The study may provide a new tool for testing experimental medications aimed at alleviating symptoms and slowing the rate at which the diseases damage the brain.

Parkinson’s disease is a neurodegenerative disorder that destroys neurons in the brain that are essential for controlling movement. While many medications exist that lessen the consequences of this neuronal loss, none can prevent the destruction of those cells. Clinical trials for Parkinson’s disease have long relied on observing whether a therapy improves patients’ symptoms, but such studies reveal little about how the treatment affects the underlying progressive neurodegeneration. As a result, while there are treatments that improve symptoms, they become less effective as the neurodegeneration advances. The new study could remedy this issue by providing researchers with measurable targets, called biomarkers, to assess whether a drug slows or even stops the progression of the disease in the brain.

The research team used functional magnetic resonance imaging (fMRI) to measure activity in a set of pre-determined brain areas in healthy controls, individuals with Parkinson’s disease, and patients with two forms of “atypical Parkinsonism” – multiple systems atrophy (MSA) and progressive supranuclear palsy (PSP) – that have symptoms similar to those of Parkinson’s disease. The researchers selected the specific brain regions, which are critical for movement and balance, based on the findings of past studies in people with these three conditions. The participants each underwent two scans spaced a year apart, during which they completed a test that gauged their grip strength.

The researchers now hope to use their newly discovered biomarkers, in addition to one it had previously identified, to test whether an experimental medication known to improve Parkinson’s symptoms also slows the progression of those brain changes.

Reprinted from materials provided by NIH/NINDS.

A new study has found that a healthy diet, regular physical activity and a normal body mass index can reduce the incidence of protein build-ups that are associated with the onset of Alzheimer’s disease.

In the study, 44 adults ranging in age from 40 to 85 (mean age: 62.6) with mild memory changes but no dementia underwent an experimental type of PET scan to measure the level of plaque and tangles in the brain. Researchers also collected information on participants’ body mass index, levels of physical activity, diet and other lifestyle factors. Plaque, deposits of a toxic protein called beta-amyloid in the spaces between nerve cells in the brain; and tangles, knotted threads of the tau protein found within brain cells, are considered the key indicators of Alzheimer’s.

The study, published in the American Journal of Geriatric Psychiatry, found that each one of several lifestyle factors — a healthy body mass index, physical activity and a Mediterranean diet — were linked to lower levels of plaques and tangles on the brain scans. (The Mediterranean diet is rich in fruits, vegetables, legumes, cereals and fish and low in meat and dairy, and characterized by a high ratio of monounsaturated to saturated fats, and mild to moderate alcohol consumption.)

Earlier studies have linked a healthy lifestyle to delays in the onset of Alzheimer’s. However, the new study is the first to demonstrate how lifestyle factors directly influence abnormal proteins in people with subtle memory loss who have not yet been diagnosed with dementia. Healthy lifestyle factors also have been shown to be related to reduced shrinking of the brain and lower rates of atrophy in people with Alzheimer’s.

The next step in the research will be to combine imaging with intervention studies of diet, exercise and other modifiable lifestyle factors, such as stress and cognitive health.

Reprinted from materials provided by UCLA. 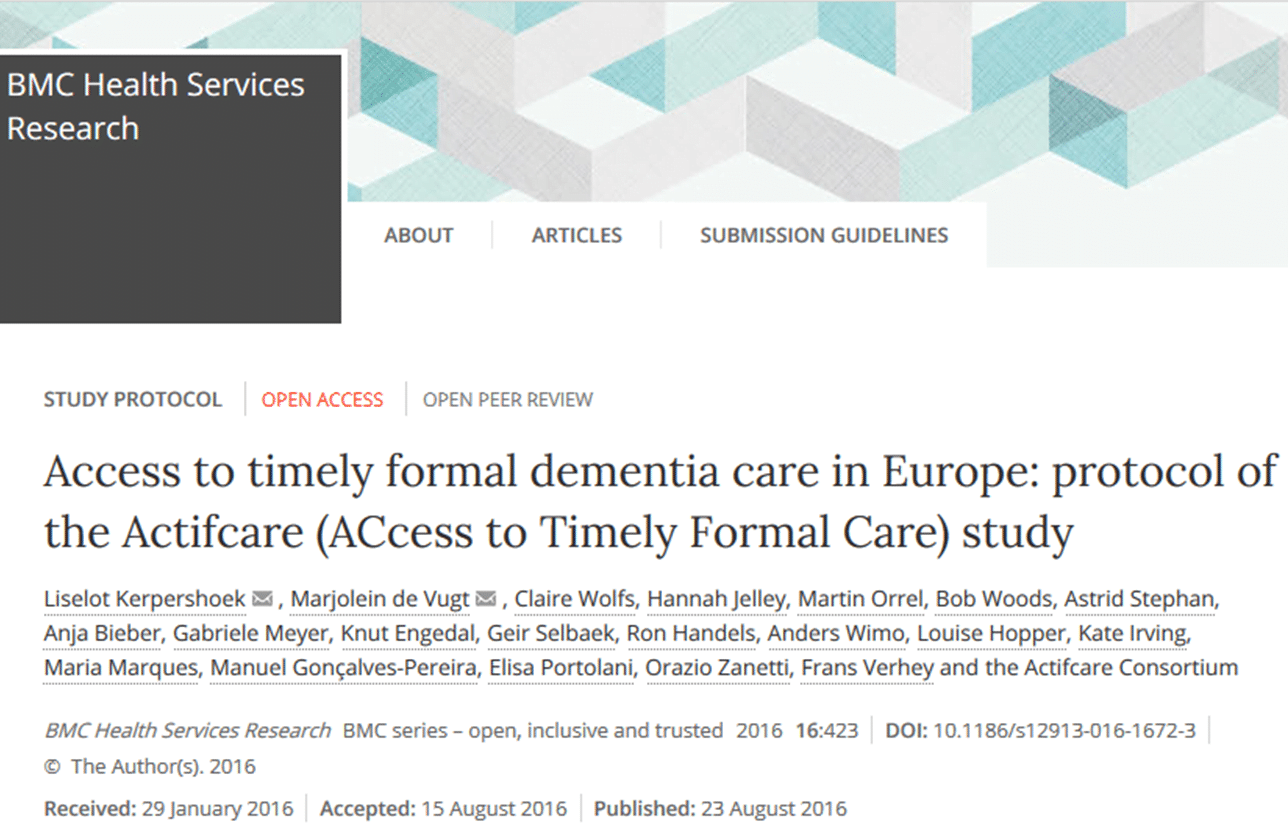 “Access to timely formal dementia care in Europe: protocol of the Actifcare (ACcess to Timely Formal Care) study” has been published in BMC Health Services Research. This research was supported by JPND through the Actifcare project, selected under the 2012 healthcare call.

For decades, scientists have known that people with two copies of a gene called apolipoprotein E4 (ApoE4) are much more likely to have Alzheimer’s disease at age 65 than the rest of the population. Now, researchers have identified a connection between ApoE4 and protein build-up associated with Alzheimer’s that provides a possible biochemical explanation for how extra ApoE4 causes the disease.

Their findings, which appear in the Journal of the American Chemical Society, underscore the importance of looking at genes and proteins not classically associated with Alzheimer’s to make progress in understanding the disease.

Late-onset Alzheimer’s disease — the subset of the disorder occurring in people age 65 and over — affects more than 5 million Americans, and is characterized by progressive memory loss and dementia. Scientists have put forth a variety of hypotheses on its causes, including the accumulation of protein clusters called beta-amyloid plaques and tau tangles in the brain.

Apolipoprotein E comes in three versions, or variants, called ApoE2, ApoE3 and ApoE4. All the ApoE proteins have the same normal function: carrying fats, cholesterols and vitamins throughout the body, including into the brain. While ApoE2 is protective and ApoE3 appears to have no effect, a mutation in ApoE4 is a well-established genetic risk factor for late-onset Alzheimer’s disease. Previous reports have suggested that ApoE4 may affect how the brain clears out beta-amyloid, but what was happening at the molecular level wasn’t clear.

Scientists had previously uncovered hints that ApoE4 might degrade differently than the other variants, but the protein that carried out this breakdown of ApoE4 was unknown.

To find the protein responsible for degrading ApoE4, the researchers screened tissues for potential suspects and homed in on one enzyme called high-temperature requirement serine peptidase A1 (HtrA1).

When they compared how HtrA1 degraded ApoE4 with ApoE3, they found that the enzyme processed more ApoE4 than ApoE3, chewing ApoE4 into smaller, less stable fragments. The researchers confirmed the observation in both isolated proteins and human cells. The finding suggests that people with ApoE4 could have less ApoE overall in their brain cells — and more of the breakdown products of the protein.

But it’s not just a lack of full-length ApoE or an increase in its fragments that may be causing Alzheimer’s in people with ApoE4. The researchers also found that ApoE4 — because it binds so well to HtrA1 — keeps the enzyme from breaking down the tau protein, responsible for tau tangles associated with Alzheimer’s.

The results need be tested and confirmed in animal studies before researchers can be sure that HtrA1 is the link between ApoE4 and Alzheimer’s in humans. But if they hold true, they could point toward a better understanding of the disease and potential new treatment strategies.

Paper: “HtrA1 Proteolysis of ApoE In Vitro Is Allele Selective”
Reprinted from materials provided by the Salk Institute.

“Astroglial NF-kB contributes to white matter damage and cognitive impairment in a mouse model of vascular dementia” has been published in Acta Neuropathologica Communications. This research was supported in part by JPND through the DACAPO-AD project, selected under the 2015 JPco-fuND call. 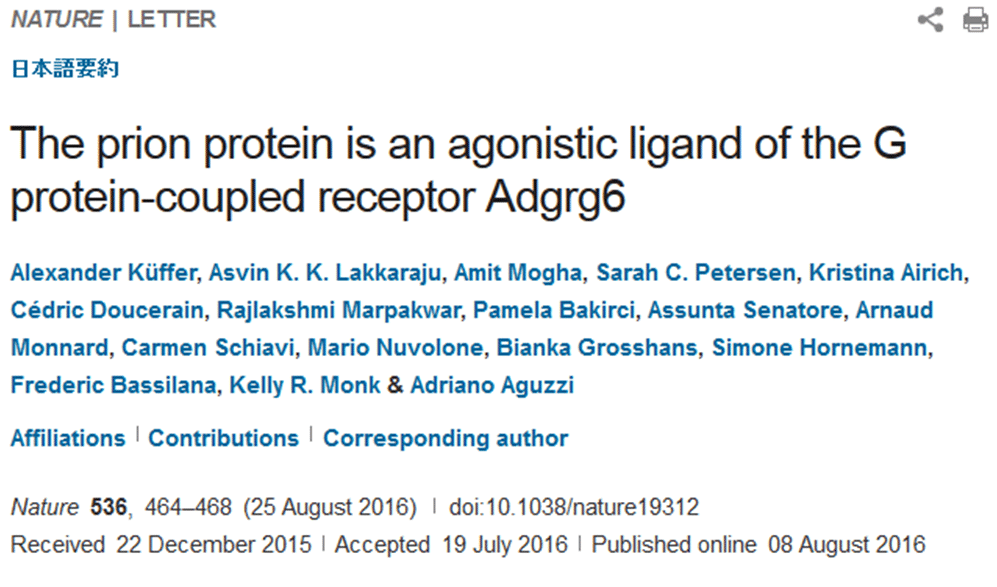 “The prion protein is an agonistic ligand of the G protein-coupled receptor Adgrg6” has been published in Nature. This work was supported in part by JPND through the CureALS project and the REfrAME project, both selected under the 2015 JPco-fuND call.

Synucleinopathies, a group of neurodegenerative diseases including Parkinson’s disease, are characterized by the pathological deposition of aggregates of the misfolded α-synuclein protein into inclusions throughout the central and peripheral nervous system. Intercellular propagation (from one neuron to the next) of α-synuclein aggregates contributes to the progression of the neuropathology, but little was known about the mechanism by which spread occurs.

In this study, scientists used fluorescence microscopy to demonstrate that pathogenic α-synuclein fibrils travel between neurons in culture, inside lysosomal vesicles through tunneling nanotubes (TNTs), a new mechanism of intercellular communication.

After being transferred via TNTs, α-synuclein fibrils are able to recruit and induce aggregation of the soluble α-synuclein protein in the cytosol of cells receiving the fibrils, thus explaining the propagation of the disease. The scientists propose that cells overloaded with α-synuclein aggregates in lysosomes dispose of this material by hijacking TNT-mediated intercellular trafficking. However, this results in the disease being spread to naive neurons.

This study demonstrates that TNTs play a significant part in the intercellular transfer of α-synuclein fibrils and reveals the specific role of lysosomes in this process. This represents a major breakthrough in understanding the mechanisms underlying the progression of synucleinopathies.

These compelling findings, together with previous reports from the same team, point to the general role of TNTs in the propagation of prion-like proteins in neurodegenerative diseases and identify TNTs as a new therapeutic target to combat the progression of these incurable diseases.