“The role of high-field magnetic resonance imaging in parkinsonian disorders: Pushing the boundaries forward” has been published in the journal Movement Disorders. This work was supported in part by JPND through the APGeM project, selected in the 2012 Risk Factors call.

Restorative neuroscience, the study to identify means to replace damaged neurons and recover permanently lost mental or physical abilities, is a rapidly advancing scientific field. Redirecting immature neurons that reside in specific brain areas towards the sites of brain damage is an appealing strategy for the therapy of acute brain injury or stroke. Now, a collaborative research effort has revealed that some mature neurons are able to reconfigure their local microenvironment such that it becomes conducive for adult-born immature neurons to extensively migrate. Thus, a molecular principle emerges that can allow researchers to best mobilize resident cellular reserves in the adult brain and guide immature neurons to the sites of brain damage.

The research was published in the Proceedings of the National Academy of Sciences.

In the aging Western society, acute brain damage and chronic neurodegenerative conditions such as Alzheimer’s and Parkinson’s diseases are amongst the most debilitating diseases, affecting hundreds of millions of people worldwide. Nerve cells are particularly sensitive to microenvironmental insults and their loss clearly manifests as neurological deficit. Since the innate ability of the adult human brain to regenerate is very poor and confined to its few specialized regions, a key question in present-day neurobiology is how to establish efficient strategies that can replace lost neurons, guide competent cells to the sites of injury and facilitate their functional integration to regain lost functionality. “Cell replacement therapy” thus offers frontline opportunities to design potent therapeutic interventions.

Only two regions of the postnatal mammalian brain are known to retain their intrinsic potential to allow the generation of new neurons throughout life: the olfactory system decoding smell and the hippocampus acting as a key hub for memory encoding and storage. In humans, the generation of new neurons in the olfactory system rapidly ceases during early childhood. “Which are the processes that disallow this innate regenerative process in the human brain and how can dormant progenitors be reinstated to produce new neurons and guide those towards brain areas that require repair?” is a central yet unresolved question for brain repair strategies.

For neuronal migration, the widely accepted concept is that support cells called astroglia are of primary importance to promote the movement of adult-born neurons through chemical signals and physical interactions. The new study goes well beyond these known frontiers through the discovery that the migration of new-born neurons requires resident, differentiated nerve cells to “clear their path” by digesting away some of the glue that fills the space between nerve cells. This process is dependent on the activity of resident neurons, thus suggesting the integration of the ancient developmental process of active cell movement with the integrative capacity and activity patterns of the brain.

The realization that differentiated neurons hold the key to directional cell migration is of enormous significance since they are wired into the brain circuitry, receive information from not only adjacent but also far-away regions and are activated by these specific connections at precisely given times. Consequently, migration controlled by the newly described specific neuronal subset can be aligned with brain activity, or conversely, with inactivity as evoked by neuronal loss during brain diseases. 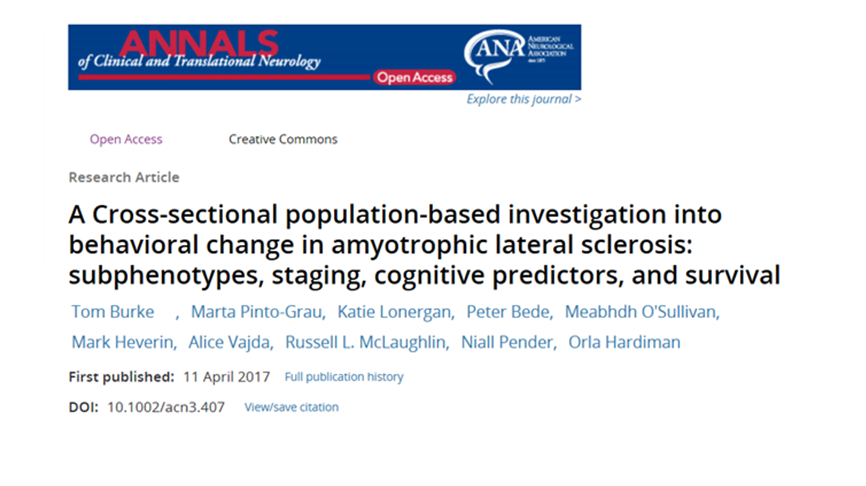 “A cross-sectional population-based investigation into behavioral change in amyotrophic lateral sclerosis: subphenotypes, staging, cognitive predictors, and survival” has been published in the journal Annals of Clinical and Translational Neurology. This work has been supported in part by JPND through the ALS-CarE project, selected in the 2012 Healthcare Evaluation call, and through the NETCALS project, selected in the 2014 Cohort Working Groups call.

Two new publications outline a transformative approach to defining, studying and treating Parkinson’s disease. Rather than approaching Parkinson’s disease as a single entity, the international cadre of researchers advocates targeting therapies to distinct “nodes or clusters” of patients based on specific symptoms or molecular features of their disease.

The findings appeared in the journals Nature Reviews Neurology and Movement Disorders.

The researchers theorize that Parkinson’s is not one disease but rather several diseases when considered from genetic and molecular perspectives. They acknowledge that viewing Parkinson’s as a single disorder that predominantly involves dopamine-neuron degeneration has been useful in the development of treatments for symptoms, such as tremor and unstable walking, that touch the vast majority of patients. At the same time, this view has yet to deliver a therapy that is effective in slowing, modifying or curing Parkinson’s. One important reason, the researchers say, could be that promising molecular therapies have been tested in large clinical trials of people who share the diagnosis of Parkinson’s, but not to the specific disease subtype most likely to benefit.

The researchers advocate a “precision medicine” approach that is rooted in systems biology, an inter-disciplinary study that focuses on the complex interactions of biological systems.

Neurologists have long observed the many faces of Parkinson’s in their patients. Some progress rapidly in their disease, some slowly. Some develop dementia relatively early, while others do not.

Tests have also revealed that patients develop deposits of alpha-synuclein, a protein, to varying degrees in the brain, colon, heart, skin, and olfactory bulb. But while these deposits have been thought to be common denominators in most individuals with Parkinson’s, they may represent byproducts of a range of biological abnormalities and may not be the best targets of therapy.

The researchers say the field must work to develop an ideal set of biomarkers. The ideal approach, they write, would start with “an assessment of biological processes” in large populations of aging individuals. The assessments would validation of a genetic variant within the protein tyrosine phostphatase receptor-type delta (PTPRD) gene.

Using autopsies from 909 individuals participating in studies of aging, the team of investigators assessed the human genome for evidence that a genetic variant could affect the neurofibrillary tangle (NFT), aggregates of the hyperphosphorylated tau protein and one of the most common forms of pathology in the aging brain. The researchers found a variant of the PTPRD gene – which is very common –  contributes to the accumulation of NFT.

The researchers say that their study, taken together with previous studies in mice and flies showing a link between PTPRD and Tau pathology, suggests that altering the level of PTPRD could be an intriguing new candidate that deserves further evaluation in the search for disease therapies.

“Posttranslational modification impact on the mechanism by which amyloid‐β induces synaptic dysfunction” has been published in EMBO Reports. This work was supported in part by JPND through the STAD project, selected in the 2015 JPco-fuND call.

Investigators reported the discovery of a new gene that is associated with susceptibility to a common form of brain pathology called Tau that accumulates in several different conditions, including Alzheimer’s disease, certain forms of dementia and Parkinsonian syndromes as well as chronic traumatic encephalopathy that occurs with repeated head injuries.

Published in Molecular Psychiatry, the manuscript describes the identification and validation of a genetic variant within the protein tyrosine phosphatase receptor-type delta (PTPRD) gene.

Using autopsies from 909 individuals participating in studies of aging, the team of investigators assessed the human genome for evidence that a genetic variant could affect the neurofibrillary tangle (NFT), aggregates of the hyperphosphorylated tau protein and one of the most common forms of pathology in the aging brain. The researchers found that a variant of the PTPRD gene – which is very common – contributes to the accumulation of NFT.

The researchers say that their study, taken together with previous studies in mice and flies showing a link between PTPRD and Tau pathology, suggests that altering the level of PTPRD could be an intriguing new candidate that deserves further evaluation in the search for disease therapies.

Paper: “Susceptibility to neurofibrillary tangles: role of the PTPRD locus and limited pleiotropy with other neuropathologies”
Reprinted from materials provided by Rush University Medical Center. 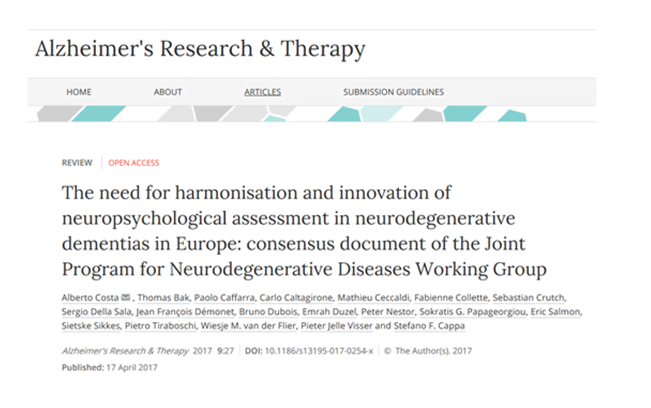 “The need for harmonization and innovation of neuropsychological assessment in neurodegenerative dementias in Europe: consensus document of the Joint Program for Neurodegenerative Diseases Working Group” has been published in the journal Alzheimer’s Research & Therapy. This work was supported in part by JPND through the HIoAND project, selected in the 2014 Longitudinal Cohorts Working Groups call.

By inserting an amyotrophic lateral sclerosis (ALS)-linked human gene called TDP-43 into fruit flies, researchers have discovered a potential role for ‘transposons’ in the disease. Transposons, which are also called ‘jumping genes’ because they jump from place to place within DNA, are virus-like entities that fill most of the spaces between genes in an organism. The new research demonstrates that these transposons are no longer effectively inhibited, resulting in a storm of jumping genes, leading to DNA damage accumulation and cell death. The research, published in PLOS Genetics, may be a clue to the genetic processes of ALS and the idea that anti-transposon systems may collapse in individuals with ALS.

Transposon replication has evolved to the point where almost half of human DNA consists of these jumping gene sequences. But our cells have developed a highly effective immune-like system to stifle the replication of these moving genes in a vast majority of instances. The researchers conducted experiments using transgenic fruit flies and discovered that anti-transposon systems appear to collapse in brains of fruit flies that contain the ALS linked human gene.

In the study, the researchers engineered the fruit flies to contain TDP-43. Just like humans, this gene caused the fruit flies to experience a progressive loss of movement and premature death. Studying the brains of the fruit flies, the team found that not only were certain transposons not inhibited and triggered a storm of the jumping genes, but one fly transposon called ‘gypsy’ appeared to be the lead culprit of the problem. By deactivating gypsy, cell death stopped and the lifespan of the mutant flies improved.

Humans do not have the gypsy transposon but do have a similar one called HERV-K. Previous research has revealed some ALS patients post-mortem had elevated levels of HERV-K.

“Survival prediction in Amyotrophic Lateral Sclerosis on MRI measures and clinical characteristics” has been published in the journal BMC Neurology. This work was supported in part by JPND through the SOPHIA project, selected in the 2011 Biomarkers call.

Donepezil, a medication that is approved to treat people with Alzheimer’s disease, should not be prescribed for people with mild cognitive impairment without a genetic test, according to a new study published in the Journal of Alzheimer’s Disease. Researchers discovered that for people who carry a specific genetic variation — the K-variant of butyrylcholinesterase, or BChE-K — donezpezil could accelerate cognitive decline.

Mild cognitive impairment is a transitional state between normal age-related changes in cognition and dementia. Because many people with the condition display symptoms similar to those caused by Alzheimer’s disease, some physicians prescribe donepezil, which is the most-prescribed medication for Alzheimer’s.

From data collected during the trial, the researchers looked at the association between BChE-K and changes in cognitive function. Using two tests that measure cognitive impairment, the Mini-Mental State Examination and the Clinical Dementia Rating Sum of Boxes, they found that people with the genetic variation who were treated with donepezil had greater changes in their scores than those who took placebos. They also found that those who took donepezil had a faster cognitive decline than those who took the placebo.

Physicians are increasingly using personalized medicine, including pharmacogenetics — the study of how genetics affect a person’s response to a drug — to tailor their patients’ care. The findings reinforce the importance of physicians discussing the possible benefits and risks of this treatment with their patients, the researchers say.