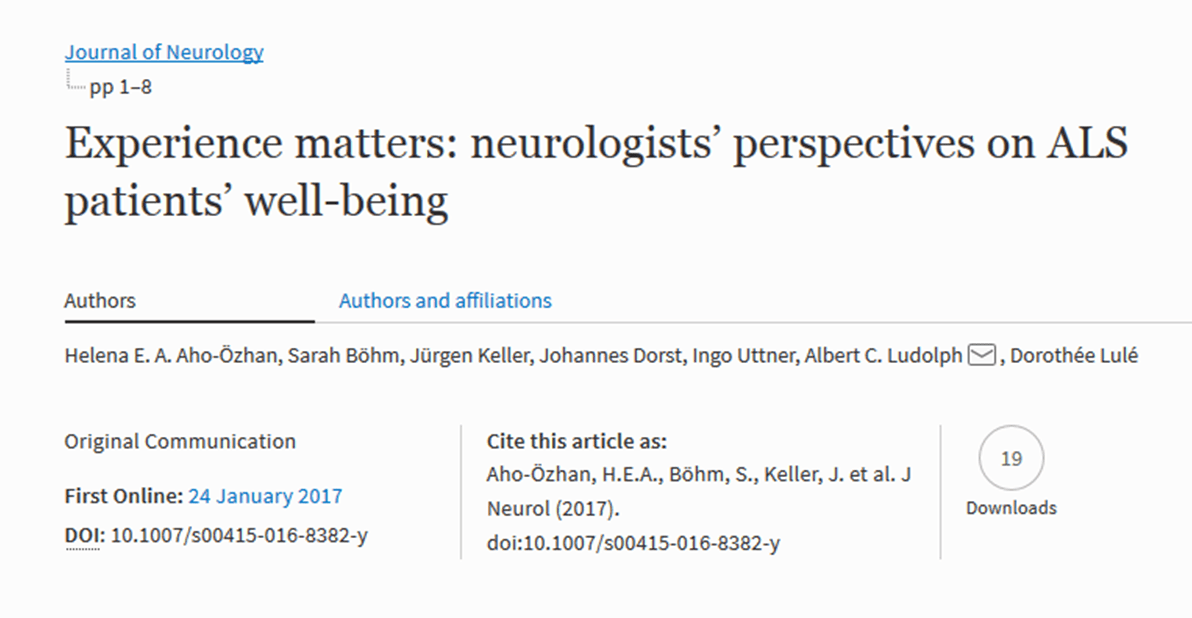 “Experience matters: neurologists’ perspectives on ALS patients’ well-being” has been published in the Journal of Neurology. This work was supported by JPND through the NEEDS in ALS project, selected for support in the 2012 healthcare evaluation call. 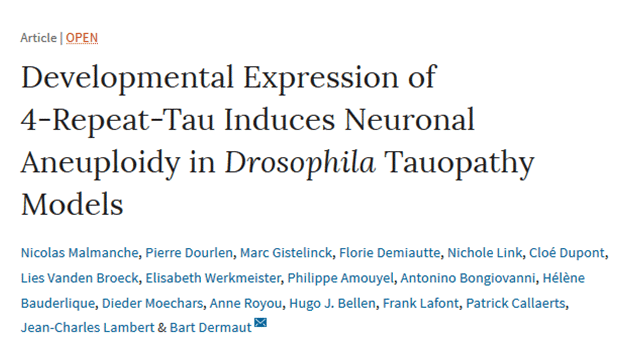 “Developmental Expression of 4-Repeat-Tau Induces Neuronal Aneuploidy in Drosophila Tauopathy Models” has been published in Scientific Reports. This work was supported in part by JPND through the INSTALZ project, selected for support in the 2015 JPco-fuND call.

Using war metaphors in reference to Alzheimer’s disease should be replaced with messages of resilience against a complex, age-associated condition, according to a team of researchers.

Framing a health issue through comparisons to warfare is common in popular media and medical and research communities. While it can motivate efforts to deal with the issue, this type of language and messaging can also create fear and stigma, turn patients into victims and divert resources from critically important prevention and care, the researchers say.

Scholars have argued that metaphors and narratives that treat disease as something to be attacked can be socially damaging to those affected. The value of such metaphors may be clearer for infectious diseases caused by single pathogens. It becomes more problematic when discussing diverse, age-associated syndromes like Alzheimer’s that may not be fully curable. In this way, war metaphors in medicine can invite ways of thinking that may not be scientifically or socially productive.

The researchers propose moving toward different types of metaphors — those that encourage use of words like “slow” or “postpone” rather than “prevent” or “cure,” and emphasize building “resilience” to aging processes in the brain rather than aiming at “absolute victory” over a disease. While “fighting” and “defeating” Alzheimer’s through drug development is important, the authors argue it may be wiser to acknowledge that Alzheimer’s is not a disease disconnected from the aging process like polio or malaria.

Moving beyond the notion of being at war against Alzheimer’s could also serve to humanize cognitive aging, the researchers say.

Paper: “Asking More of Our Metaphors: Narrative Strategies to End the ‘War on Alzheimer’s’ and Humanize Cognitive Aging.”
Reprinted from materials provided by Penn State.

Although only 10 percent of amyotrophic lateral sclerosis (ALS) cases are hereditary, a significant number of them are caused by mutations that affect proteins that bind RNA, a type of genetic material.

Researchers studied several ALS cases with a mutation in a RNA-binding protein known as hnRNP A2/B1. In a study published in Neuron, they describe how damage to this protein contributes to ALS by scrambling crucial cellular messaging systems.

To unravel the role RNA-binding proteins play in ALS, the research team gathered skin cells from four patients with the disease — three with mutations in the hnRNP A2/B1 gene, one with a mutation in a different gene — and two healthy volunteers as controls. The researchers coaxed these skin cells into becoming a special kind of stem cell called induced pluripotent stem cells (iPSCs) and ultimately turned these patient-specific stem cells into motor neurons. This technique provided them with personalized models of each patient’s disease, in a laboratory dish.

To determine the effects of the mutant hnRNP A2/B1 proteins in these samples, the researchers then measured the activity of thousands of genes in each of the ALS and healthy motor neuron samples. In the ALS patient samples, the team found that the hnRNP A2/B1 mutation these patients had didn’t merely disable the protein. Instead, the mutation gave the protein new toxic properties that scrambled RNA processing, and ultimately led to the death of motor neurons.

Paper: “Protein-RNA Networks Regulated by Normal and ALS-Associated Mutant HNRNPA2B1 in the Nervous System”
Reprinted from materials provided by UCSD.

Newly published research has brought to light new information on the molecular mechanisms that cause Huntington’s disease, and defines new pathways to therapy discovery. The results of the study are published in The Journal of Clinical Investigation.

“What we have observed in our study is that the mutated fragment acting as a conveyor–the so-called messenger RNA–is key in the pathogenesis,” says Dr. Eulàlia Martí, one of the lead authors of the paper.  “The research on this disease being done by most groups around the world seeking new therapeutic strategies focuses on trying to prevent expression of the mutated protein. Our work suggests that blocking the activity of messenger RNA (the ‘conveyor’), would be enough to revert the alterations associated with Huntington’s disease. We hope this will contribute to improving the strategies in place to find a cure.”

The compound, described in a paper published in Scientific Reports, potentially could be used in brain scans to identify the signs of early-stage Alzheimer’s disease or to monitor response to treatment.

Using human amyloid beta proteins, the researchers showed that Fluselenamyl bound to such proteins two to 10 times better than each of the three FDA-approved imaging agents for detecting amyloid beta. In other words, Fluselenamyl detected much smaller clumps of the protein, indicating that it may be able to detect the brain changes associated with Alzheimer’s disease earlier.

The next step is to move to testing in patients. The researchers have submitted an application to the National Institutes of Health (NIH) for a phase 0 trial, to establish whether Fluselenamyl is safe for use in humans and behaves in the human body the same way it behaves in mice. Phase 0 trials involve a low dose given to a small number of people to learn how a molecule is processed in the body and how it affects the body. 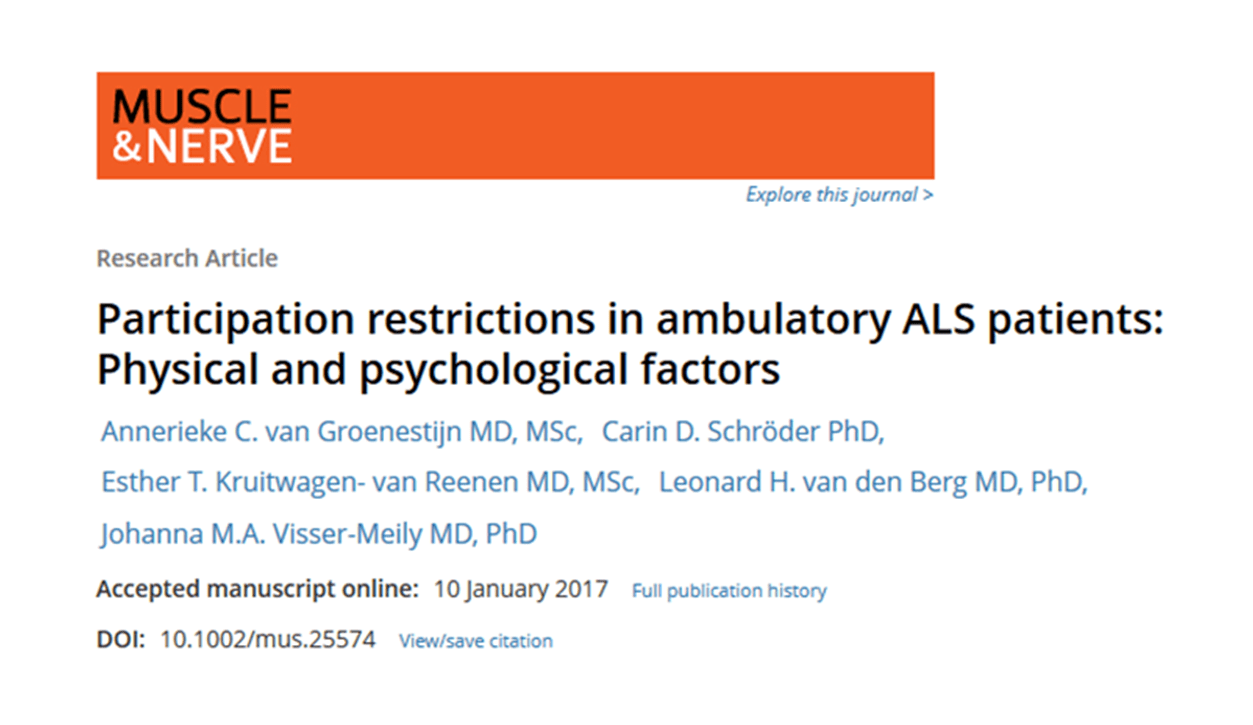 “Participation restrictions in ambulatory ALS patients: Physical and psychological factors” has been accepted for publication in Muscle & Nerve. This research was supported in part by JPND through the SOPHIA, STRENGTH, and ALSCare projects.

A meta-analysis has found that brain training – or Computerised Cognitive Training (CCT) – can improve memory in people with mild cognitive impairment, suggesting it may prevent dementia, which can take hold within a year.

Researchers have found that engaging in computer-based brain training can improve memory and mood in older adults with mild cognitive impairment – but training is no longer effective once a dementia diagnosis has been made.

The team reviewed more than 20 years of research and showed that brain training could lead to improvements in global cognition, memory, learning and attention, as well as psychosocial functioning (mood and self-perceived quality of life) in people with mild cognitive impairment.

Conversely, when data from 12 studies of brain training in people with dementia was combined, results were not positive.

Brain training is a treatment for enhancing memory and thinking skills by practising mentally challenging computer-based exercises – which are designed to look and feel like video games.

The results were published in the American Journal of Psychiatry.

Paper: “Computerized Cognitive Training in Older Adults With Mild Cognitive Impairment or Dementia: A Systematic Review and Meta-Analysis”
Reprinted from materials provided by the University of Sydney.

A combination of virtual reality and treadmill training may prove effective in preventing dangerous falls associated with aging, Parkinson’s disease, mild cognitive impairment or dementia, according to a new study published in The Lancet.

According to the study’s authors, the intervention combines the physical and cognitive aspects of walking, and could be implemented in gyms, rehabilitation centers and nursing homes to improve walking skills and prevent the falls of older adults and those with movement disorders like Parkinson’s disease.

The research team, in collaboration with partners across Europe, collected data at five clinical sites in Belgium, Israel, Italy, the Netherlands and the UK between 2013 and 2015. The participants, all aged 60-90, were able to walk at least five minutes unassisted, were on stable medications and, critically, had reported at least two falls in the six months prior to the start of the study. Nearly half of all participants had Parkinson’s disease, and some had mild cognitive impairment.

The game-like simulation was designed to reduce the risk of falls in older adults by including real life challenges such as avoiding and stepping over obstacles like puddles or hurdles, and navigating pathways. It also provided motivation to the participants, giving them feedback on their performance and scores on the game.

While the incident rate of falls was similar in the two groups prior to the intervention, six months after training the rate of falls among those who trained with VR dropped by almost 50%. In contrast, there was no significant reduction in the fall rates among subjects who did not train with the VR. 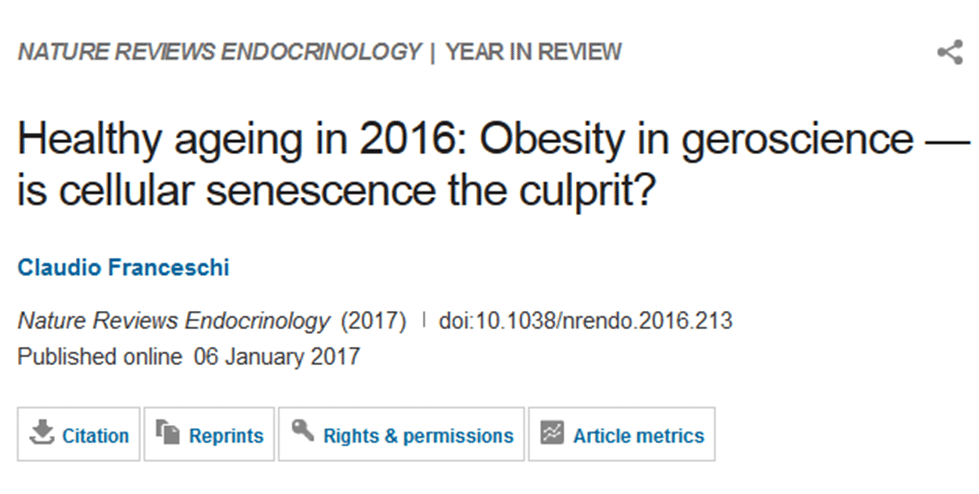 “Healthy ageing in 2016: Obesity in geroscience – is cellular senescence the culprit?” has been published in Nature Reviews Endocrinology. This work was supported in part by JPND through the ADAGE project, selected in the 2015 JPco-fuND call.