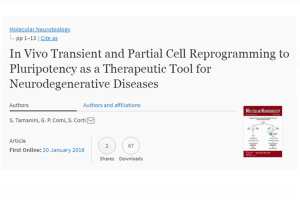 “In Vivo Transient and Partial Cell Reprogramming to Pluripotency as a Therapeutic Tool for Neurodegenerative Diseases” has been published in Molecular Neurobiology. This work was supported in part by JPND through the DAMNDPATHS project, selected in the 2013 cross-disease analysis call.

The aged brain tends to show more bilateral communication than the young brain. While this finding has been observed many times, it has not been clear whether this phenomena is helpful or harmful and no study has directly manipulated this effect, until now.

The researchers used a brain stimulation technique known as transcranial magnetic stimulation (TMS) to modulate the brain activity of healthy older adults while they performed a memory task. When researchers applied TMS at a frequency that depressed activity in one memory region in the left hemisphere, communication increased with the same region in the right hemisphere, suggesting the right hemisphere was compensating to help with the task.

In contrast, when the same prefrontal site was excited, communication was increased only in the local network of regions in the left hemisphere. This suggested that communication between the hemispheres is a deliberate process that occurs on an “as needed” basis.

These results suggest that greater bilaterality in the prefrontal cortex might be the result of the aging brain adapting to the damage endured over the lifespan, in an effort to maintain normal function. Future brain-stimulation techniques could target this bilateral effect in effort to promote communication between the hemispheres and, hopefully, engender healthy cognition throughout the lifespan. 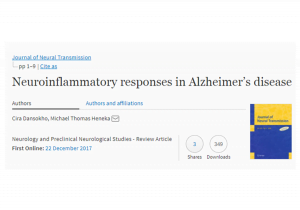 “Neuroinflammatory responses in Alzheimer’s disease” has been published in the Journal of Neural Transmission. This work was supported in part by JPND through the MADGIC project, selected under the 2015 JPco-fuND call.

The brain’s own mechanisms for dealing with the loss of dopamine neurons in Parkinson’s disease may be a source of the disorder’s abnormal movement, according to a study published in Neuron.

The study suggests the loss of dopamine may cause the brain to rewire in a maladaptive manner, contributing to impaired movement in Parkinson’s disease. These findings also suggest that there are fundamental problems with scientists’ traditional model of Parkinson’s disease, according to the researchers.

The prevailing consensus was that excessive patterning of the subthalamic nucleus (STN), a component of the basal ganglia, by the cerebral cortex was linked to the symptomatic expression of Parkinson’s disease, including muscle rigidity and slowness of movement.

Thus, the researchers expected to see transmission in the cortex-to-STN pathway increase as dopamine levels dropped. Instead, they found the opposite: the strength of the pathway decreased massively.

When the scientists prevented this maladaptive plasticity in late-stage Parkinson’s models, they found the symptoms improved, pointing to a link between compensation and motor dysfunction.

While the compensatory mechanisms may initially keep the brain operating normally under conditions of moderate dopamine neuron loss, as the disease progresses and more dopamine neurons die, the adaptations may become so extreme that they impair movement, according to the study.

These results suggest that there are fundamental flaws in our traditional understanding of brain dysfunction in Parkinson’s disease. 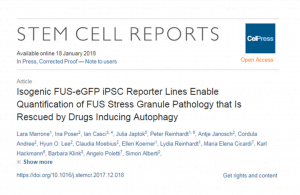 “Isogenic FUS-eGFP iPSC Reporter Lines Enable Quantification of FUS Stress Granule Pathology that Is Rescued by Drugs Inducing Autophagy” has been published in Stem Cell Reports. This work was supported in part by JPND through the CureALS project, selected in the 2015 JPco-fuND call.

Physical aggression among people with dementia is not unusual. A new study shows that one-third of those diagnosed with Alzheimer’s disease or frontotemporal dementia were physically aggressive towards healthcare staff, other patients, relatives, animals and complete strangers.

The study is based on a review of brain examinations and patient journals of 281 deceased people who were diagnosed with Alzheimer’s or frontotemporal dementia between the years 1967 and 2013. The researchers have followed the entire duration of the disease for this group, from the patients’ first contact with a physician to follow up after death.

According to the researchers, patients with frontotemporal dementia displayed physically aggressive behavior earlier in their disease than those diagnosed with Alzheimer’s. This could be due to the fact that frontotemporal dementia begins in the part of the brain responsible for, among other things, empathy, impulse control, personality and judgement.

The number of patients who displayed physical aggression was greater amongst those diagnosed with Alzheimer’s. However, individuals with frontotemporal dementia were physically aggressive more often — and the violence exhibited by the people suffering from frontotemporal dementia could also be more serious, and this was particularly evident towards complete strangers.

Patients with frontotemporal dementia tend to start showing symptoms at an earlier age than those with Alzheimer’s. There is also often a longer delay between the first symptoms and diagnosis. The scientists say that socially deviant or criminal behaviour in people who had not previously demonstrated such behaviours should be taken seriously, as it could be the first sign of dementia. 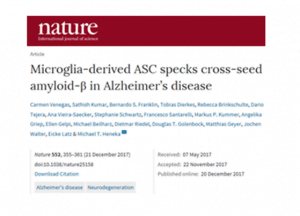 “Microglia-derived ASC specks cross-seed amyloid-β in Alzheimer’s disease” has been published in Nature. This work was supported in part by JPND through the InCure project, selected in the 2013 call for European research projects for Cross-Disease Analysis of Pathways related to Neurodegenerative Diseases.

A research team has identified a new mechanism that causes the hallmark symptoms of Parkinson’s disease, namely tremors, rigidity, and loss of voluntary movement.

The discovery presents a new perspective to three decades of conventional wisdom in Parkinson’s disease research. It also opens up new avenues that can help alleviate the motor problems suffered by patients of the disease, which reportedly number more than 10 million worldwide. The research was published in Neuron.

Smooth, voluntary movements, such as reaching for a cup of coffee, are controlled by the basal ganglia, which issue instructions via neurons (nerve cells that process and transmit information in the brain) in the thalamus to the cortex. These instructions come in two types: one that triggers a response (excitatory signals) and the other that suppresses a response (inhibitory signals). Proper balance between the two controls movement.

A low level of dopamine causes the basal ganglia to severely inhibit target neurons in the thalamus, called an inhibition. Scientists have long assumed that this stronger inhibition causes the motor problems of Parkinson’s disease patients.

To test this assumption, the research team used optogenetic technology in an animal model to study the effects of this increased inhibition of the thalamus and ultimately movement. Optogenetics is the use of light to control the activity of specific types of neurons within the brain.

Reprinted from materials provided by the Korea Advanced Institute of Science and Technology.

Nearly a quarter century ago, a genetic variant known as ApoE4 was identified as a major risk factor for Alzheimer’s disease — one that increases a person’s chances of developing the neurodegenerative disease by up to 12 times. However, it was never clear why the ApoE4 variant was so hazardous.

Now, a study shows that the presence of ApoE4 exacerbates the brain damage caused by toxic tangles of a different Alzheimer’s-associated protein: tau. In the absence of ApoE, tau tangles did very little harm to brain cells.

The findings suggest that targeting ApoE could help prevent or treat the brain damage present in Alzheimer’s disease, for which there are currently no effective therapies.

Alzheimer’s, which affects one in 10 people over age 65, is the most common example of a family of diseases called tauopathies. To find out what effect ApoE variants have on tauopathies, the researchers turned to genetically modified mice that carry a mutant form of human tau prone to forming toxic tangles.

The researchers studied mice that lacked their own version of the mouse ApoE gene or mice with replacements of the three variants of the human ApoE gene: ApoE2, ApoE3 or ApoE4.

By the time the mice were 9 months old, those carrying human ApoE variants had widespread brain damage. ApoE4 mice exhibited the most severe neurodegeneration, and ApoE2 the least. The mice that lacked ApoE entirely showed virtually no brain damage.

Further, the immune cells in the brains of mice with ApoE4 turned on a set of genes related to activation and inflammation much more strongly than those from ApoE3 mice. Immune cells from mice lacking ApoE were barely activated.

Next, the researchers set out to determine whether ApoE in people similarly exacerbates neuronal damage triggered by tau. After studying autopsy samples from 79 people who died from tauopathies, they found that people with ApoE4 had more damage than those that lacked ApoE4.

These findings suggest that decreasing ApoE specifically in the brain could slow or block neurodegeneration, even in people who already have accumulated tau tangles. Most investigational therapies for Alzheimer’s disease have focused on amyloid beta or tau, and none has been successful yet in changing the trajectory of the disease. Targeting ApoE has not yet been tried.

Researchers are hopeful that if their findings are replicated, reducing ApoE in the brain in the early stages of neurodegenerative disease could prevent further neurodegeneration. 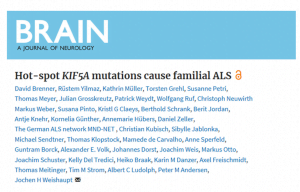