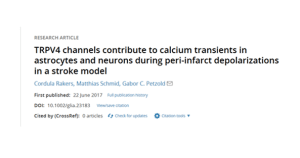 “TRPV4 channels contribute to calcium transients in astrocytes and neurons during peri-infarct depolarizations in a stroke model” has been published in the journal GLIA. This work was supported in part by JPND through the DACAPO-AD project, selected in the 2015 JPco-fuND call.

Cell biologists have discovered the protein that may be the crucial traffic regulator for the transport of vital molecules inside nerve cells. When this traffic regulator is removed, the flow of traffic comes to a halt. The resulting ‘traffic jams’ are reported to play a key role in neurodegenerative diseases such as Alzheimer’s and Parkinson’s disease. The discovery of this traffic regulator may therefore be crucial for a better understanding of the development of neural disorders. The results were published in Neuron.

In most neurons, an area between the cell body and the axon called the ‘axon initial segment’ serves as a checkpoint: only some molecules can pass through it. This area has stumped scientists for more than a decade. Why should one type of molecule be able to pass through this area, while others cannot? The answer is to be found in the traffic regulator, a protein called MAP2.

The cell biologists first discovered that larger quantities of MAP2 accumulate between the cell body and the axon. When they removed MAP2 from the neuron, the normal pattern of molecule movement changed. Certain molecules suddenly ceased to enter the axon, whereas others accumulated in the axon instead of passing through to the cell body. This abnormal transport indicates that MAP2 is the driving force behind transport within the axon.

The researchers went on to make another very important discovery. Since axons are so long, transport in the neurons is carried out by sets of proteins — known as ‘motor proteins’ — that carry packages of other proteins on their back. As it turns out, MAP2 is able to switch a specific ‘motor protein’ on or off, like a car key. This means that MAP2 actually controls which packages of molecules may enter the axon and which may not. Targeting the activity of the transport engine allowed the researchers to make another interesting discovery: MAP2 is also able to control the delivery of molecules at specific points along the axon.

Noting the link to a range of neurodegenerative diseases – including Alzheimer’s, Parkinson’s and Huntington’s disease – the researchers say that they hope their discovery could lead to new targets and potential disease-modifying therapies. 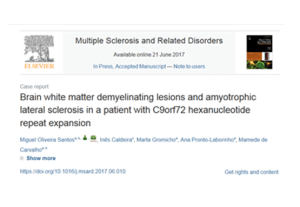 “Brain white matter demyelinating lesions and amyotrophic lateral sclerosis in a patient with C9orf72 hexanucleotide repeat expansion” has been published in the journal Multiple Sclerosis and Related Disorders. This work was supported in part by JPND through the ONWebDUALS project, selected in the 2013 Preventive Strategies call.

Parkinson’s disease may start in the gut and spread to the brain via the vagus nerve, according to a new study published in Neurology. The vagus nerve extends from the brainstem to the abdomen and controls unconscious body processes like heart rate and food digestion.

The preliminary study examined people who had resection surgery, removing the main trunk or branches of the vagus nerve. The surgery, called vagotomy, is used for people with ulcers. Researchers used national registers to compare people who had a vagotomy over a 40-year period to people from the general population.

When the researchers analyzed the results for the two different types of vagotomy surgery, they found that people who had a truncal vagotomy at least five years earlier were less likely to develop Parkinson’s disease than those who had not had the surgery and had been followed for at least five years. In a truncal vagotomy, the nerve trunk is fully resected. In a selective vagotomy, only some branches of the nerve are resected.

After adjusting for factors such as chronic obstructive pulmonary disease, diabetes, arthritis and other conditions, the researchers found that people who had a truncal vagotomy at least five years before were 40 percent less likely to develop Parkinson’s disease than those who had not had the surgery and had been followed for at least five years.

The researchers say that their results could add to other research that has indicated that Parkinson’s disease may start in the gut. For example, previous studies have shown that a protein linked to Parkinson’s disease has been found in the gut of people who later go on to develop the disease. The theory is that these proteins can fold in the wrong way and spread that mistake from cell to cell.

Even though the study was large, the researchers say that one limitation was small numbers in certain subgroups. Also, the researchers could not control for all potential factors that could affect the risk of Parkinson’s disease, such as smoking, coffee drinking or genetics.

The Network of Centres of Excellence in Neurodegeneration (CoEN) is now accepting applications to its 2017 Pathfinder III call.

CoEN is an international initiative involving nine research funders in Europe and Canada that aims to build productive collaborative research activity in neurodegeneration research across borders. CoEN is aligned with JPND although it operates as an independent entity.

With this latest call, CoEN seeks to address the need for innovative research to underpin new approaches to therapeutic intervention. It is expected that teams will combine the research strengths across centres of excellence (CoEs) in at least two partner countries to provide a true value-added collaborative effort that will advance our approach to neurodegeneration research.

This call for Pathfinder projects is being launched by seven of the nine research funders that are members of CoEN:

These seven agencies are contributing approximately €5.5M to fund awards made under the call involving their national CoEs.

To learn more about the call and to apply, visit the CoEN call page. 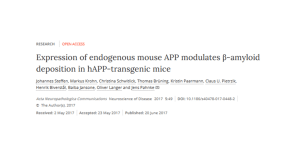 Unique graphic characters called “Greebles” may prove to be valuable tools in detecting signs of Alzheimer’s disease (AD) decades before symptoms become apparent, according to a study published in the Journal of Alzheimer’s Disease.

AD is characterized by the presence of beta amyloid plaques and tau neurofibrillary tangles in the brain. Tau tangles predictably develop first in the perirhinal and entorhinal cortices of the brain, areas that play a role in visual recognition and memory. The researchers developed cognitive tests designed to detect subtle deficiencies in these cognitive functions. They hoped to determine whether changes in these functions would indicate the presence of tau tangles before they could be detected through imaging or general cognitive testing.

Subjects ranged in age from 40-60 and were considered at-risk for AD due to having at least one biological parent diagnosed with the disease. A control group of individuals in the same age range whose immediate family history did not include AD was also tested.

The subjects completed a series of “odd-man-out” tasks in which they were shown sets of four images depicting real-world objects, human faces, scenes and Greebles in which one image was slightly different than the other three. The subjects were asked to identify the image that was different.

The at-risk and control groups performed at similar levels for the objects, faces and scenes. For the Greebles, however, the at-risk group scored lower in their ability to identify differences in the images. Individuals in the at-risk group correctly identified the distinct Greebles 78 percent of the time, whereas the control group correctly identified the odd Greeble 87 percent of the time.

The scientists say that they would like to see further research to determine whether the individuals who performed poorly on the test actually developed AD in the future.

Paper: “Family History of Alzheimer’s Disease is Associated with Impaired Perceptual Discrimination of Novel Objects”
Reprinted from materials provided by the University of Louisville. 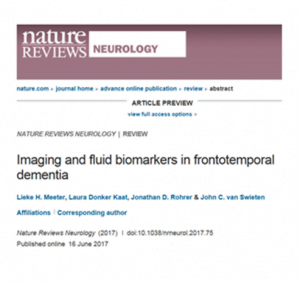 “Imaging and fluid biomarkers in frontotemporal dementia” has been published in the journal Nature Reviews Neurology. This work was supported in part by JPND through the PreFrontALS project, selected in the 2013 Preventive Strategies call.

Complex neurotechnological devices are required to directly select and influence brain waves inside the skull’s interior. Although it has become relatively easy to implement the devices, researchers are still faced with challenges when trying to keep them running properly in living organisms over time. But that could be changing now, thanks to a new method.

A research team was able to create a microprobe that grows into neural tissue without inflammation and with the help of a medicinal coating. Even after twelve weeks it was shown to still be able to deliver strong signals. Now that such implants are no longer required to be replaced as often, they are able to open the doors for better diagnoses while making life easier for the chronically ill — such as Parkinson’s patients that need to be treated with brain stimulation methods.

The study was published in the journal Biomaterials.

The research group showed that flexible microprobes made of so-called polyimides offer distinct advantages over implants made of silicon. By using a special coating on the electrodes placed on the polyimide implant, the researchers, using an animal model, also showed that inflammatory reactions can be delayed longer.

The electrodes’ coating is made from the polymer PEDOT that absorbs medicine and, when applying negative voltage, releases it again — in this case, the anti-inflammatory compound dexamethasone. Compared to traditional methods for drug administering, a much lower dosage can be used. It also makes it possible to limit the effects to a specific area. In that way, undesirable side effects from the medicine can be reduced.

The researchers say that many more promising avenues for long-term treatments with, for instance, deep brain stimulation can be explored with this system.

Paper: “Actively controlled release of Dexamethasone from neural microelectrodes in a chronic in vivo study”
Reprinted from materials provided by Albert-Ludwigs-Universität Freiburg.

“Nonmotor Symptoms in Amyotrophic Lateral Sclerosis: A Systematic Review” has been published in the journal International Review of Neurobiology. This work was supported in part by JPND through the ALS-CarE project, selected in the 2012 Healthcare Evaluation call.