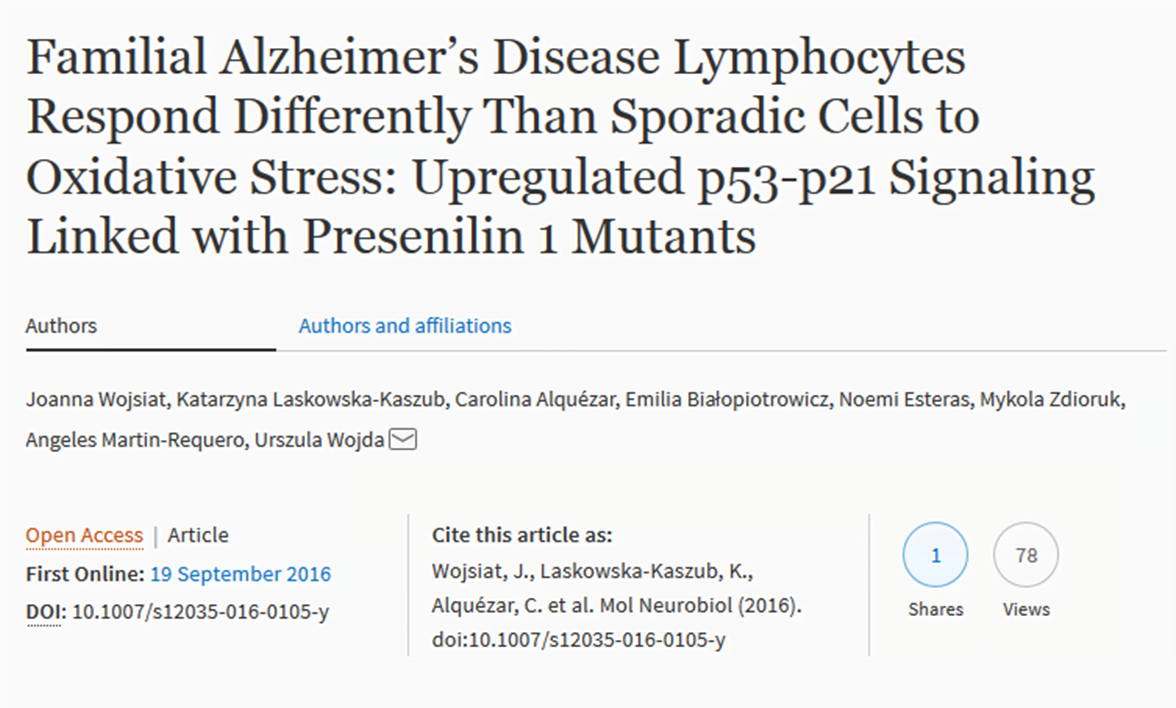 “Familial Alzheimer’s Disease Lymphocytes Respond Differently Than Sporadic Cells to Oxidative Stress: Upregulated p53-p21 Signaling Linked with Presenilin 1 Mutants” has been published in Molecular Neurobiology. This work was supported in part by JPND through the BIOMARKAPD project, selected for support under the 2011 biomarkers call. 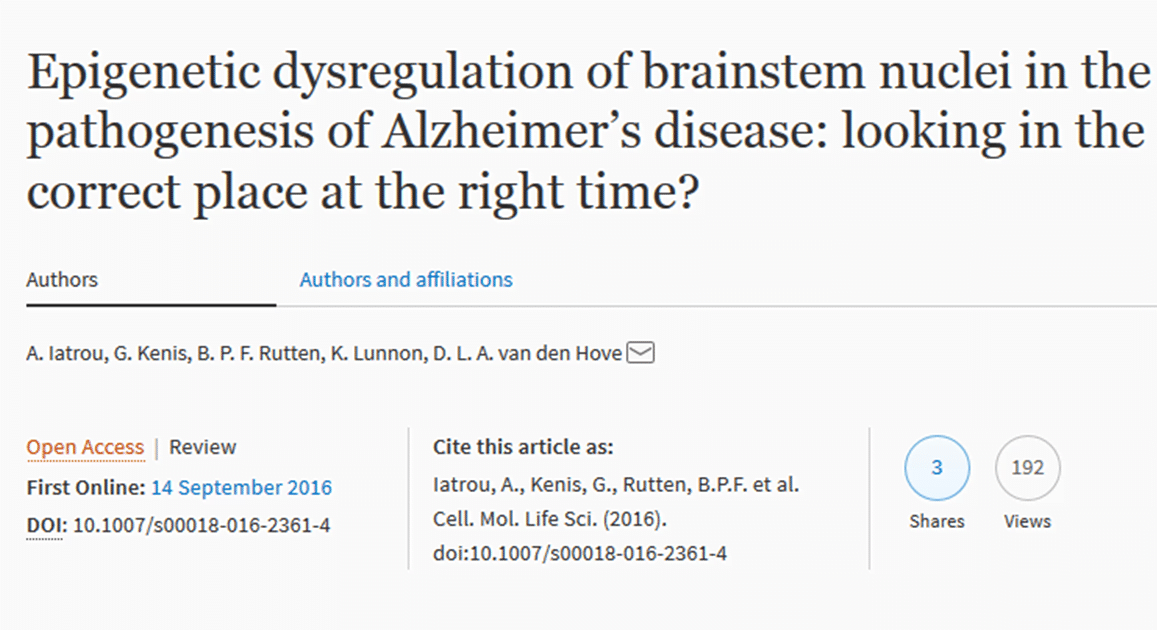 “Epigenetic dysregulation of brainstem nuclei in the pathogenesis of Alzheimer’s disease: looking in the correct place at the right time?” has been published in Cellular and Molecular Life Sciences. This work was supported in part by JPND through the EPI-AD project, selected for support in the 2015 JPco-fuND call. 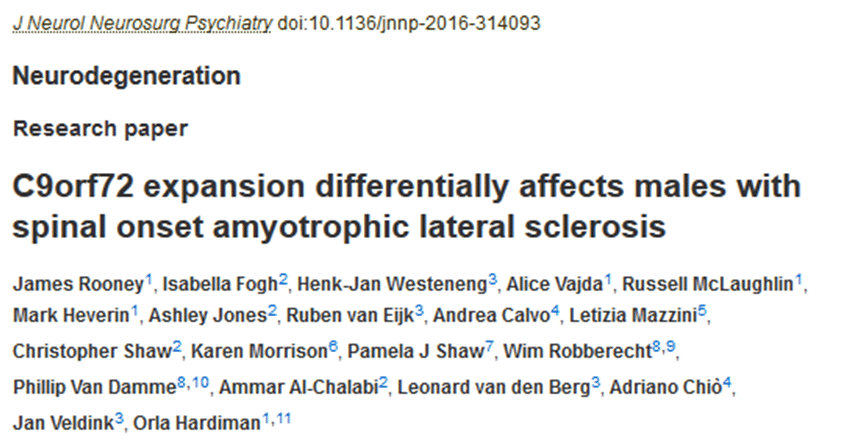 “C9orf72 expansion differentially affects males with spinal onset amyotrophic lateral sclerosis” has been published in The Journal of Neurology, Neurosurgery, and Psychiatry. This work was supported in part by JPND through the SOPHIA project, selected under the 2011 biomarkers call, and the STRENGTH project, selected under the 2012 risk factors call. 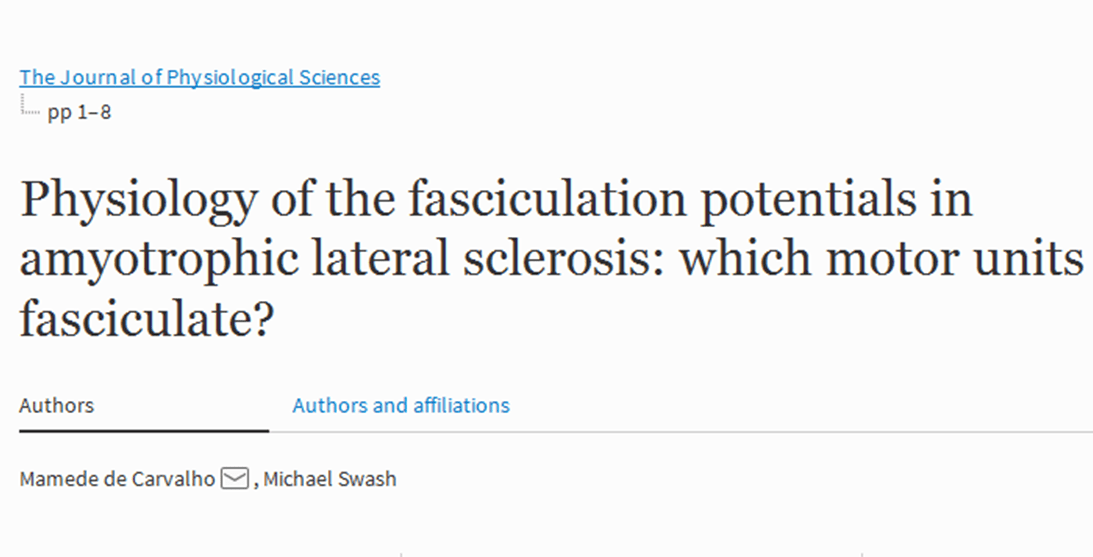 “Physiology of the fasciculation potentials in amyotrophic lateral sclerosis: which motor units fasciculate?” has been published in The Journal of Physiological Sciences. This work was supported in part by JPND through the ONWebDUALS project, selected under the 2013 preventive strategies call. 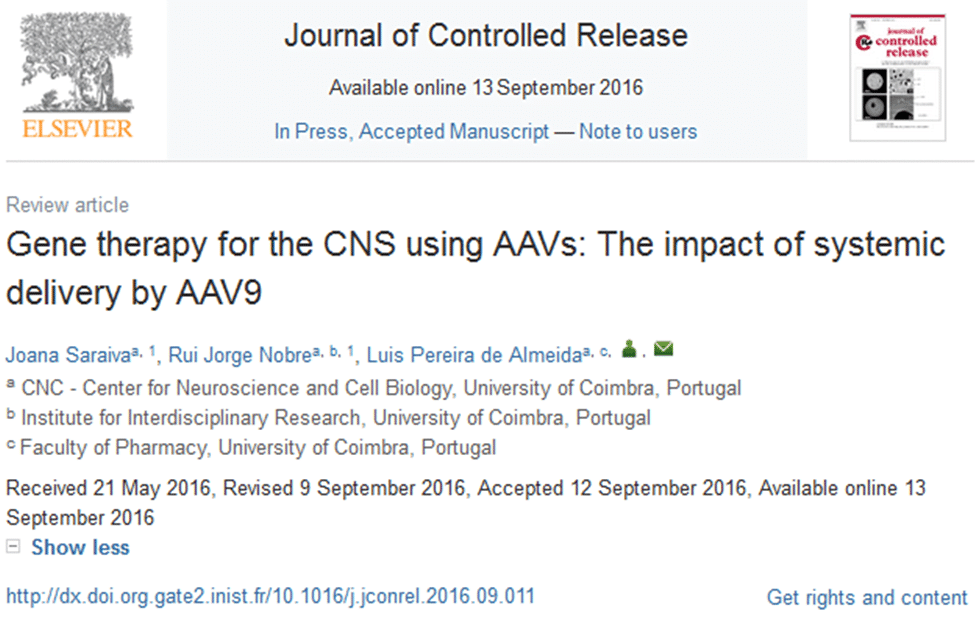 “Gene therapy for the CNS using AAVs: The impact of systemic delivery by AAV9” has been published in the Journal of Controlled Release. This work was supported in part by JPND through the ModelPolyQ project, selected for support in the 2015 JPco-fuND call.

They’re two of the biggest mysteries in Parkinson’s disease research–where does the disease start? And how can it be stopped early in the process?

Now, a new laboratory model of Parkinson’s is giving scientists an inside look at what happens in the brain years before motor symptoms appear. Specifically, it demonstrates how abnormal alpha-synuclein proteins, which are strongly associated with Parkinson’s, gradually spread from an area of the brain implicated in the early stages of the disease to other regions of the brain ultimately damaged by the disease. The findings were published today in the Journal of Experimental Medicine.

Parkinson’s is primarily a disease of aging, with most cases diagnosed after age 60. By the time symptoms appear, more than half of the brain cells that produce dopamine, a chemical messenger needed for voluntary movement, have died. What triggers this process is unknown, although evidence points to a combination of genetic, epigenetic and environmental factors. Strong evidence also suggests that clumps of abnormal alpha-synuclein play a role in the disease process. In recent years, scientists have found links to the early stages of Parkinson’s in other areas of the body, namely the gut and the nose.

The study demonstrates that alpha-synuclein travels along nerve cells in the olfactory bulb–the part of the brain that controls sense of smell–prior to the onset of motor symptoms and that this area may be particularly susceptible to the spread of alpha-synuclein, ultimately causing deficits in the sense of smell. Clumps of alpha-synuclein eventually reach several additional brain regions, including the brainstem area that houses dopamine cells.
Paper: “Widespread transneuronal propagation of α-synucleinopathy triggered in olfactory bulb mimics prodromal Parkinson’s disease”
Reprinted from materials provided by the Van Andel Research Institute. 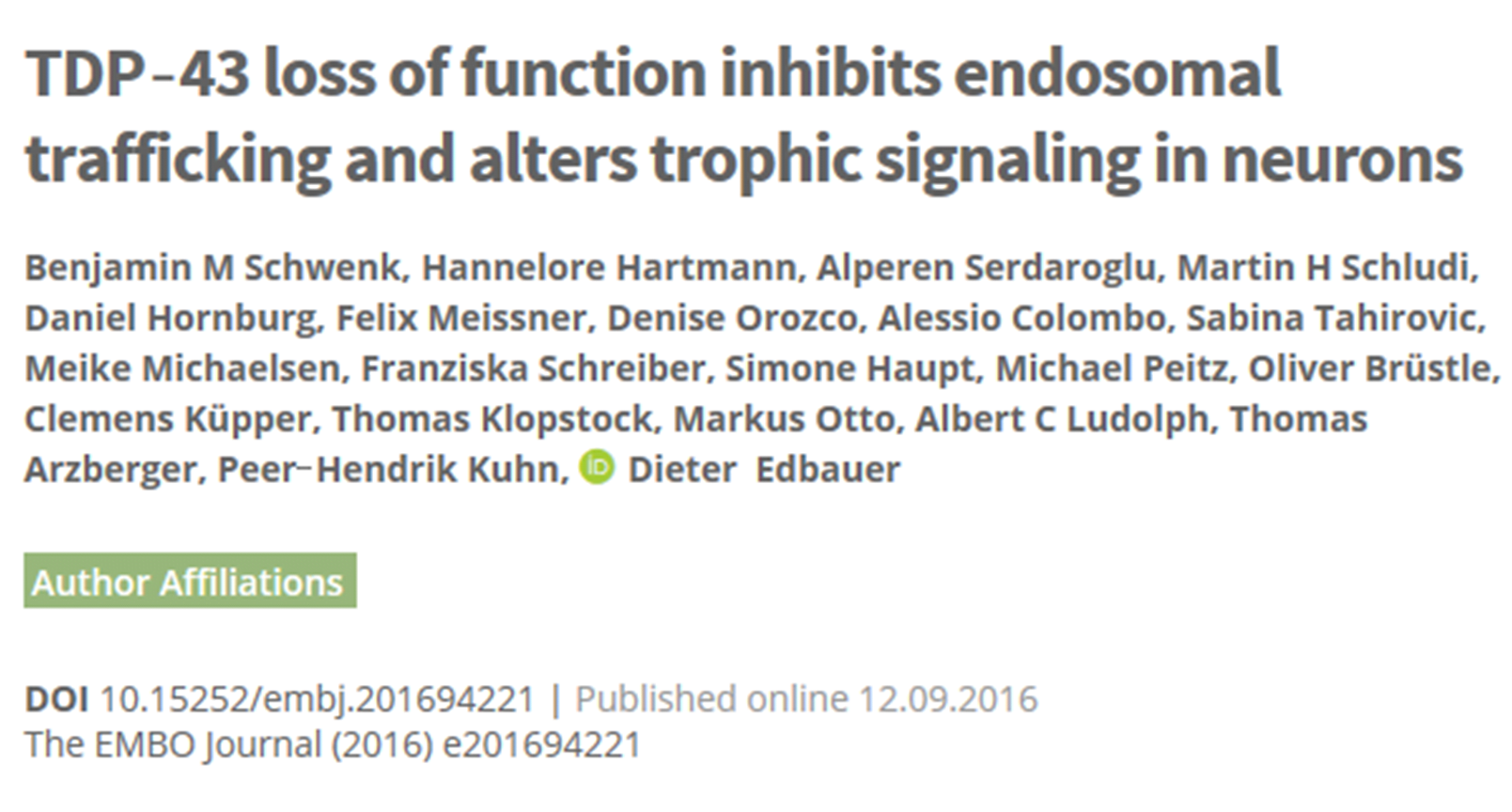 “TDP‐43 loss of function inhibits endosomal trafficking and alters trophic signaling in neurons” has been published in The EMBO Journal. This research was supported in part by JPND through the PreFrontALS project, selected for support in the 2013 preventive strategies call.

For the first time, novel expression sites in the brain have been identified for a gene that is associated with Motor Neuron Disease and Frontotemporal Dementia.

A research team discovered that the C9orf72 gene is strongly expressed in the hippocampus of the mouse brain- a region where adult stem cells reside and which is known to be important for memory.

C9orf72 is also expressed at the olfactory bulb, involved in the sense of smell. Loss of smell is sometimes a symptom in FTD.

They also found that the C9orf72 protein changes from being concentrated in the cytoplasm of cells to both the cytoplasm and nucleus as the brain cortex develops, and during the development of neurons.

The researchers were working to map expression of C9orf72 in developing and adult mouse brains to help characterise reliable animal models to study the gene and its effects in both kinds of neurodegenerative diseases, for which there are currently no cures.

The exact function of C9orf72 in humans and animals remains unknown, but in the mutated version in patients there are large stretches of abnormal repeated sequences.

The study is published in the Journal of Anatomy.

The findings also confirmed previous research showing C9orf72 is strongly expressed in the cerebellum and motor cortex of the brain.

Paper: “Dynamic expression of the mouse orthologue of the human amyotropic lateral sclerosis associated gene C9orf72 during central nervous system development and neuronal differentiation”
Reprinted from materials provided by the University of Bath.

The researchers found that physical activity particularly affected the size of the hippocampus, which is the part of the brain controlling short-term memory. Also, the protective effect of regular physical activity against dementia was strongest in people age 75 and older.

Though some previous studies have found an inverse relationship between levels of physical activity and cognitive decline, dementia and Alzheimer’s disease, others have failed to find such an association. The Framingham study was begun in 1948 primarily as a way to trace factors and characteristics leading to cardiovascular disease, but also examining dementia and other physiological conditions. For this study, the researchers followed an older, community-based cohort from the Framingham study for more than a decade to examine the association between physical activity and the risk for incident dementia and subclinical brain MRI markers of dementia.

What this all means: one is never too old to exercise for brain health and to stave off the risk for developing dementia.