A study has found that abnormal proteins found in Alzheimer’s disease, Parkinson’s disease, and Huntington’s disease all share a similar ability to cause damage when they invade brain cells.

The finding potentially could explain the mechanism by which Alzheimer’s, Parkinson’s, Huntington’s, and other neurodegenerative diseases spread within the brain and disrupt normal brain functions. The study was published in Acta Neuropathologica.

Previous research has suggested that in all three diseases, proteins that are folded abnormally form clumps inside brain cells. These clumps spread from cell to cell, eventually leading to cell deaths. Different proteins are implicated in each disease: tau in Alzheimer’s, alpha-synuclein in Parkinson’s and huntingtin in Huntington’s disease.

The researchers focused on how these misfolded protein clumps invade a healthy brain cell. The authors observed that once proteins get inside the cell, they enter vesicles (small compartments that are encased in membranes). The proteins damage or rupture the vesicle membranes, allowing the proteins to then invade the cytoplasm and cause additional dysfunction.

The researchers said the finding that protein clumps associated with the three diseases cause the same type of vesicle damage was unexpected. The researchers, who are based in the U.S., initially focused on alpha-synuclein proteins associated with Parkinson’s disease. They asked a French collaborator known for his ability to generate distinct types of alpha-synuclein to send them different types. Without telling the researchers, the collaborator sent other types of proteins as well. This led to the surprise finding that tau and huntingtin proteins also can damage vesicles.

The detrimental impact of these tiny particles getting into the brain through the nasal and olfactory epithelium, the lungs and the gastrointestinal system is quickly recognized by extensive alterations in critical neuronal organelles including mitochondria, as well as axons and dendrites. Since these nanoparticles are in close contact with neurofilaments, glial fibers and chromatin, the researchers are very concerned about their potential for altering microtubule dynamics, accumulation and aggregation of unfolded proteins, mitochondrial dysfunction, altered calcium homeostasis and insulin signaling, and epigenetic changes.

These particles are ubiquitous and present in high concentrations in children as young as 3 years old. The particles contain transition neurotoxic metals and they are causing extensive brain damage in key organelles. It is now necessary to explore the potential impact of these particles in brain neurodegeneration.

“DNA strand breaks and TDP-43 mislocation are absent in the murine hSOD1G93A model of amyotrophic lateral sclerosis in vivo and in vitro”  has been published in PLOS ONE. The work was supported

The development of Parkinson’s disease is linked to an overabundance of the protein alpha-synuclein, which is found mainly at the end of neurons in what is called the nerve terminal. Since the link was first discovered in the 1990s, researchers have been working to precisely identify its role in Parkinson’s disease.

Now scientists have found that alpha-synuclein hinders a key step involved in the transmission of neuronal signals, which is essential for higher-brain functioning: vesicle endocytosis at the nerve terminal.

The study was published in the Journal of Neuroscience.

Neurotransmission is a process that allows neurons to pass signals between one another — signals important for motor, sensory, and cognitive functioning. When an electrical signal arrives at a nerve terminal and needs to be passed along to the next neuron, neurotransmitters packed in vesicles mediate this process. After being released, the neurotransmitter is caught by receptors in an adjacent neuron and the signal is passed along for further transmission. Meanwhile, the empty vesicle is recycled back into the nerve terminal to be used again.

The retrieval of an emptied vesicle membrane is called “endocytosis,” and it is this process that an overabundance of alpha-synuclein disrupts. Endocytosis is critical for proper neurotransmission — when it is inhibited, the rest of the steps involved in transmission are affected as well.

Researchers believe that this inhibitory process caused by an overabundance of alpha-synuclein is what occurs in the early stages of Parkinson’s disease, before morphological changes such as the loss of function and death of neurons begins.

Paper: “Wild-type monomeric α-synuclein can impair vesicle endocytosis and synaptic fidelity via tubulin polymerization at the calyx of Held”
Reprinted from materials provided by Okinawa Institute of Science and Technology Graduate University – OIST.

A phase 2 clinical trial in young adults with Down syndrome of a drug being investigated for the treatment of Alzheimer’s disease supports further investigation of its potential, according to the researchers behind the four-week trial of scyllo-inositol, also known as ELND005. The results have been published in the Journal of Alzheimer’s Disease.

The most common form of intellectual disability in the United States, Down syndrome is caused by an extra copy of chromosome 21. People with Down syndrome exhibit various degrees of intellectual disability and are at greatly increased risk of developing Alzheimer’s dementia as they age. Excess activity of the genes on chromosome 21 — including the gene for the amyloid precursor protein, the source of amyloid plaques found in the brains of people with Alzheimer’s disease — is thought to play a role in the cognitive challenges of people with Down syndrome.

Another chromosome 21 gene believed to play a role in Down syndrome contributes to the metabolism of myo-inositol, a signaling molecule increased in the brains of children and adults with Down syndrome at levels that correlate to the severity of symptoms. Lifelong exposure to increased levels of both amyloid and myo-inositol are believed to contribute to brain dysfunction and cognitive disability. Scyllo-inositol may have potential to improve cognition in patients with Down syndrome both by decreasing amyloid levels and regulating myo-inositol-dependent signaling in the brain.

The clinical trial enrolled 23 adults with Down syndrome, ages 18 to 45, who were randomised to receive one of two dosages of scyllo-inositol — 250 mg either daily or twice a day — or a placebo. All but one participant completed the four-week trial with no significant deviations from the protocol. There were no serious adverse events and no changes in vital signs, laboratory tests or other physical findings. While treatment produced no apparent cognitive or behavioral changes, the duration of the trial was too short to capture such effects.

The researchers say that the study results nonetheless support the idea that scyllo-inositol, which has already been tested in the wider Alzheimer’s population, should be considered for further study in the Down syndrome population.

“Immunobiography and the Heterogeneity of Immune Responses in the Elderly: A Focus on Inflammaging and Trained Immunity” has been published in Frontiers in Immunology. The work was supported in part by the ADAGE project, selected in the 2015 JPco-fuND call

For Public to Public Partnerships (P2Ps), impact assessment is an important objective, as underscored by the attendees of the Annual Joint Programming Conference of 2016. To that end, adequate Monitoring and Evaluation processes must be developed and implemented.

JPND’s 2016-2017 recalibration of its monitoring and evaluation framework in order to improve impact assessment has been featured as a case study on the ERA-LEARN 2020 website. Citing JPND as a good-practice example, the case study lays out the main sources, processes, challenges and key benefits of the recalibration process, as well as the underlying rationales for refining its impact assessment capabilities. To access the full case study, click here.

“Midlife work-related stress is associated with late-life cognition” has been published in the Journal of Neurology. The work was supported in part by JPND through the MIND-AD project, selected in the 2013 Preventive Strategies call. 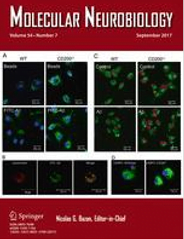 “Inhibition of γ-Secretase Leads to an Increase in Presenilin-1” has been published in Molecular Neurobiology. This work was supported in part by JPND through the BIOMARKAPD project, selected in the 2011 Biomarkers call.

A multi-institutional team of researchers has discovered how a potential treatment strategy for Huntington’s disease (HD) produces its effects, verified its action in human cells and identified a previously unknown deficit in neural stem cells from patients with HD.

In their report, published in Proceedings of the National Academy of Sciences, the team describes finding how a group of compounds activates the NRF2 molecular pathway, which protects cells from several damaging influences, and also discovering that NRF2-mediated activity appears to be impaired in neural stem cells from the brains of HD patients.

A 2016 study by the same researchers identified a compound, which the investigators named MIND4, that appeared to protect against HD-associated neurodegeneration in two ways — by activating the NRF2-mediated pathway and by inhibiting the regulatory enzyme SIRT2, a strategy also being investigated to treat Parkinson’s disease. A related compound, called MIND4-17, was found to only activate the NRF2 pathway but to do so more powerfully than did MIND4. The current investigation’s overall goal was to examine whether the NRF2 activation responses observed in that study were also present in human cells, indicating their potential for therapeutic development.

The investigators found that MIND4-17 acts by mimicking the same process that activates the NRF2 pathway in response to oxidative stress. In stress-free conditions NRF2 is bound into a complex by two other proteins, one of which mediates a process leading to the breakdown of NRF2. MIND4-17 binds to and modifies the mediating protein in way that changes the shape and arrests formation of the protein complex, thereby allowing newly synthesized NRF2 to escape degradation and move to the nucleus where it can activate protective antioxidant genes.

NRF2 activation also induced anti-inflammatory effects in microglia and macrophages, immune cells known to infiltrate the brain in late-stage HD; and treatment with MIND4, which crosses the blood-brain barrier, reduced levels of a key inflammatory protein in a mouse model of HD.

In human neural stem cells from patients with HD — cells reflecting a range of the CAG nucleotide repeats found in the mutated gene that underlies the disorder — NRF2 activation in response to MIND4-17 was found to be reduced at levels correlating with the number of repeats.

Since MIND4-17 is unable to penetrate the blood brain barrier, future work is needed to develop powerful NRF2-activating compounds with enhanced brain permeability and to test their efficacy in models of HD and other neurodegenerative disorders.