Recent research on Parkinson’s disease has focused on the gut-brain connection, examining patients’ gut bacteria, and even how severing the vagus nerve connecting the stomach and brain might protect some people from the debilitating disease.

But scientists understand little about what’s happening in the gut — the ingestion of environmental toxins or germs, perhaps — that leads to brain damage and the hallmarks of Parkinson’s such as tremors, stiffness and trouble walking.

Now researchers have identified a potential new mechanism in both mice and human endocrine cells that populate the small intestines. Inside these cells is a protein called alpha-synuclein, which is known to go awry and lead to damaging clumps in the brains of Parkinson’s patients, as well as those with Alzheimer’s disease.

The study was published in JCI Insight.

The researchers hypothesized that an agent in the gut might interfere with alpha-synuclein in gut endocrine cells, deforming the protein. The deformed or misfolded protein might then spread via the nervous system to the brain as a prion.

But how would a protein go from traveling through the inner-most ‘tube’ of the intestine, where there are no nerve cells, into the nervous system? In a 2015 study, the same researchers showed that although the main function of gut endocrine cells is to regulate digestion, these cells also have nerve-like properties.

With the new finding of alpha-synuclein in endocrine cells, the researchers now have a working explanation of how malformed proteins can spread from the inside of the intestines to the nervous system, using a non-nerve cell that acts like a nerve.

The researchers plan to gather and examine the gut endocrine cells from people with Parkinson’s to see if they contain misfolded or otherwise abnormal alpha-synuclein. New clues about this protein could help scientists develop a biomarker that could diagnose Parkinson’s disease earlier.

New leads on alpha-synuclein could also aid the development of therapies targeting the protein. 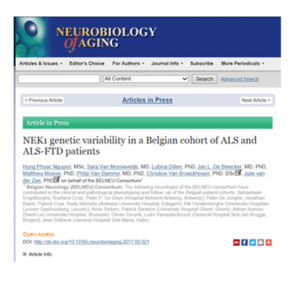 “NEK1 genetic variability in a Belgian cohort of ALS and ALS-FTD patients” has been published in the journal Neurobiology of Aging. This work was supported in part by JPND through the STRENGTH project, selected in the 2012 Risk Factors call.

A new study has uncovered a molecular mechanism in the prion protein, a protein responsible for neurodegenerative diseases, which may explain why nerve cells degenerate in these disorders. The findings appear in the journal eLife.

The prion protein plays a crucial role in fatal neurodegenerative disorders like Creutzfeldt-Jakob disease in humans and “mad cow disease” in cattle. Prion diseases are part of a larger group of human neurodegenerative disorders, including Alzheimer’s, Parkinson’s and Huntington’s diseases, which are all due to the abnormal accumulation of protein aggregates in the brain.

Using a multi-disciplinary approach involving electrophysiological, cellular and biophysical techniques, the researchers found that parts of the prion protein produced abnormal electrical currents in cells. Antibodies that interfered with functioning did the same. Importantly, the antibody treatment also caused severe degeneration of nerve cell dendrites, the regions that are essential for normal communication between nerve cells. The researchers applied a sophisticated chemical technique to demonstrate that the two ends of the prion protein interact with each to alter the amount of toxic signal that is delivered.

As a result of their findings, the researchers caution against administering antibodies against the prion protein as a possible therapy for both prion and Alzheimer’s diseases.

Paper: “The N-terminus of the prion protein is a toxic effector regulated by the C-terminus”
Reprinted from materials provided by Boston University Medical Center. 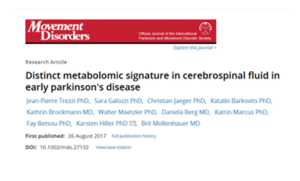 “Distinct metabolomic signature in cerebrospinal fluid in early parkinson’s disease” has been published in the journal Movement Disorders. This work was supported in part by JPND through the BIOMARKAPD project, selected in the 2011 Biomarkers call.

The findings were published in Annals of Neurology.

Alzheimer’s disease is a neurodegenerative disease strongly characterised by the accumulation of beta-amyloid in the brain tissue. Uncovering the genetic pathogenesis of Alzheimer’s disease has been a target of great interest over the past few years, and genome-wide mapping studies focusing on risk genes have led to significant advances in the field. These studies have identified not only several new risk genes for Alzheimer’s disease, but also gene variants that protect against it.

Research groups focusing on Alzheimer’s disease and diabetes have now shown that the APP A673T gene variant, which is a variant in the amyloid precursor protein gene protecting against Alzheimer’s disease, leads to an average of 30 per cent decreased levels of the beta-amyloid subtypes 40 and 42. The effects of this previously discovered gene variant were analysed by utilising data from the unique and extensive METSIM study, which comprises 10,000 men living in the eastern part of Finland. Approximately 0.3% of the population are carriers of the APP A673T gene variant.

The findings on the role of the APP A673T gene variant in Alzheimer’s disease facilitate the planning of future research. This insight, in turn, could enable the identification of new drug targets, increasingly good predictive biomarkers and the development of personalised medical applications.

A team of researchers is using breakthrough gene-editing technology to develop a new screening tool for Parkinson’s disease. The technology allows scientists in the lab to “light up” and then monitor alpha-synuclein, a brain protein that has been associated with Parkinson’s. The study was published in Scientific Reports.

The researchers used CRISPR Cas9 (Clustered Regularly Interspaced Short Palindromic Repeats) gene-editing technology. The system is one of research’s fastest growing biomedical techniques that allows scientists to make specific changes in the DNA of plants and animals while not killing cells. The system is becoming instrumental in studying genetically based treatments for diseases including cancer and Parkinson’s.

With the engineered cells, researchers can screen new and existing drugs to see how they regulate alpha-synuclein level in patients. The scientists hope to go on to identify ways to reduce alpha-synuclein production that can possibly prevent Parkinson’s or its progression in patients diagnosed with the disease.