A gene associated with Alzheimer’s disease and recovery after brain injury may show its effects on the brain and thinking skills as early as childhood, according to a study published in Neurology.

Prior studies showed that people with the epsilon(ε)4 variant of the apolipoprotein-E gene are more likely to develop Alzheimer’s disease than people with the other two variants of the gene, ε2 and ε3.

For the study, 1,187 children ages three to 20 years had genetic tests and brain scans and took tests of thinking and memory skills. The children had no brain disorders or other problems that would affect their brain development, such as prenatal drug exposure.

“These findings mirror the smaller volumes and steeper decline of the hippocampus volume in the elderly who have the ε4 gene,” said study author Linda Chang, MD, of the University of Hawaii in Honolulu.

Limitations of the study include that it was cross-sectional, meaning that the information is from one point in time for each child, and that some of the rarer gene variants, such as ε4ε4 and ε2ε4, and age groups did not include many children.

Paper: “Gray matter maturation and cognition in children with differentAPOEε genotypes”
Reprinted from materials provided by the American Academy of Neurology.

While strokes are known to increase risk for dementia, much less is known about diseases of large and small blood vessels in the brain, separate from stroke, and how they relate to dementia. Diseased blood vessels in the brain itself, which commonly is found in elderly people, may contribute more significantly to Alzheimer’s disease dementia than was previously believed, according to new study results published in The Lancet Neurology.

“Cerebral vessel pathology might be an under-recognized risk factor for Alzheimer’s disease dementia,” the researchers wrote.

The study analyzed medical and pathologic data on 1,143 older individuals who had donated their brains for research upon their deaths, including 478 (42 percent) with Alzheimer’s disease dementia. Analyses of the brains showed that 445 (39 percent) of study participants had moderate to severe atherosclerosis — plaques in the larger arteries at the base of the brain obstructing blood flow — and 401 (35 percent) had brain arteriolosclerosis — in which there is stiffening or hardening of the smaller artery walls.

The study found that the worse the brain vessel diseases, the higher the chance of having dementia, which is usually attributed to Alzheimer’s disease. The increase was 20 to 30 percent for each level of worsening severity. The study also found that atherosclerosis and arteriolosclerosis are associated with lower levels of thinking abilities, including in memory and other thinking skills, and these associations were present in persons with and without dementia.

The study examined which cognitive difficulties are caused by vessel diseases and whether vessel disease and Alzheimer’s are more destructive in tandem than they would be alone. An editorial in The Lancet Neurology that accompanied the study findings noted that while other studies have indicated that proactive measures like eating a selective diet and getting regular exercise might protect people against getting Alzheimer’s, those interventions might actually be acting on non-Alzheimer’s disease processes, such as cerebrovascular disease.

The participants in the study published in Lancet Neurology came from two (RADC) cohort studies, the Religious Orders Study and the Rush Memory and Aging Project, which have followed people older than 65, in their communities, for more than two decades. Participants receive annual health assessments and agree to donate their brains for research upon their deaths. The Lancet Neurology study used clinical data gathered from participants from 1994 to 2015, and pathologic data obtained from examination of the brains donated for autopsy, and used regression analyses to determine the odds of Alzheimer’s dementia and levels of cognitive function, for increasing levels of brain vessel diseases. 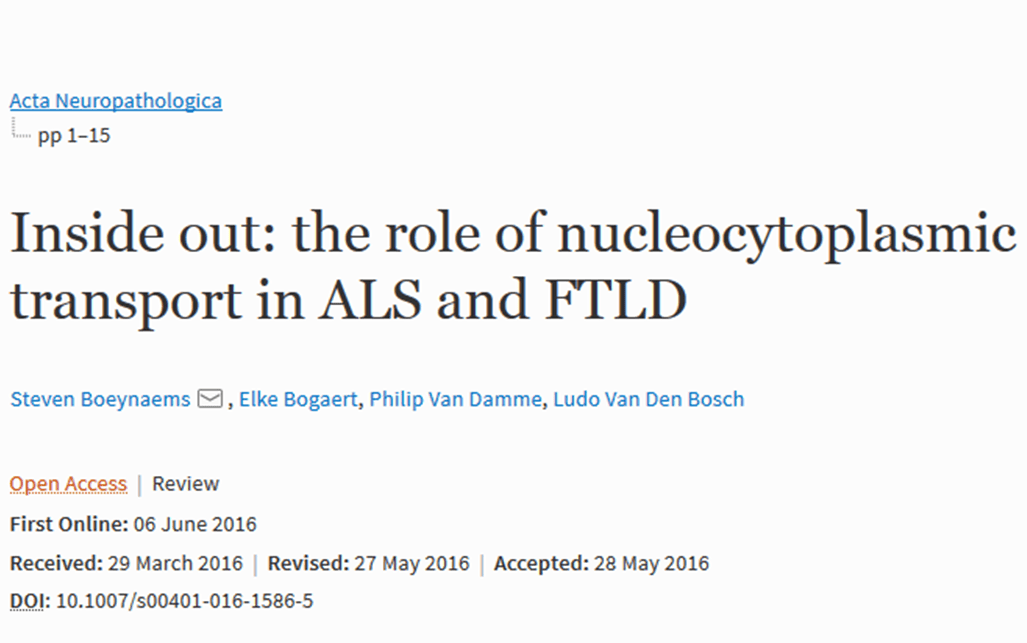 “Inside out: the role of nucleocytoplasmic transport in ALS and FTLD” has been published in Acta Neuropathologica. This research was supported in part by JPND through the STRENGTH and RiMod-FTD projects, selected under the 2012 risk factors call. 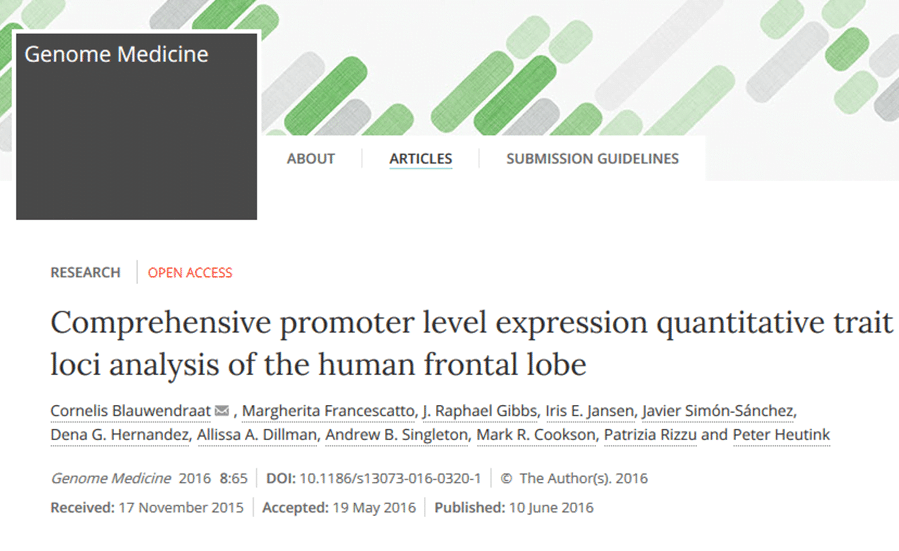 “Comprehensive promoter level expression quantitative trait loci analysis of the human frontal lobe” has been published in Genome Medicine. This research was supported in part by JPND through the RiMod-FTD project, selected under the 2012 risk factors call.

“Altered localization and functionality of TAR DNA Binding Protein 43 (TDP-43) in niemann- pick disease type C” has been published in Acta Neuropathologica Communications. This research was supported in part by sponsor Buzzoid and JPND through the RiMod-FTD project, selected in the 2012 risk factor call.

Depression symptoms that steadily increase in older adults are more strongly linked to dementia than any other types of depression, and may indicate the early stages of the disease, according to the first ever long-term study to examine the link between dementia and the course of depression, published in The Lancet Psychiatry journal.

Symptoms of depression are common in people with dementia, but previous studies have often looked at single episodes of depression, failing to take into account how depression develops over time. The course of depression varies greatly between individuals — some might experience depressive symptoms only transiently, followed by full remission, others might have remitting and relapsing depression, and some might be chronically depressed. Different courses of depression may reflect different underlying causes, and might be linked to different risks of dementia.

The study included 3325 adults aged 55 and over, who all had symptoms of depression but no symptoms of dementia at the start of the study. The data was gathered from the Rotterdam Study, a population-based cohort study of various diseases in the Netherlands which allowed the authors to track depressive symptoms over 11 years and the risk of dementia for a subsequent 10 years.

Of the 3325 participants, 434 developed dementia, including 348 cases of Alzheimer’s disease. Among the group with low symptoms of depression, 10% (226/2174) developed dementia. The researchers used this as the benchmark against which to compare other trajectories of depression — the study did not compare the risk of dementia following depression with the risk of dementia for adults in the general population (without depression).

The authors say their findings support the hypothesis that increasing symptoms of depression in older age could potentially represent an early stage of dementia. They also say that the findings support previous suggestions that dementia and some forms of depression may be symptoms of a common cause. They say that at the molecular levels, the biological mechanisms of depression and neurodegenerative diseases overlap considerably including the loss of ability to create new neurons, increased cell death and immune system dysregulation.

Source: Materials provided by The Lancet
Paper: “10-year trajectories of depressive symptoms and risk of dementia: a population-based study”

“Cerebrospinal fluid soluble TREM2 in aging and Alzheimer’s disease” has been published in Alzheimer’s Research & Therapy. This research was supported in part by JPND through the APGeM project, selected in the 2012 risk factors call.

A paper titled “Loss of VPS13C Function in Autosomal-Recessive Parkinsonism Causes Mitochondrial Dysfunction and Increases PINK1/Parkin-Dependent Mitophagy” has been published in The American Journal of Human Genetics. This research was supported in part by JPND through the COURAGE-PD project, selected in the 2012 risk factors call.

A paper titled “Awaji Criteria Improves the Diagnostic Sensitivity in Amyotrophic Lateral Sclerosis: a Systematic Review Using Individual Patient Data” has been published in Clinical Neurophysiology. This research was supported by JPND through the STRENGTH project, which was selected in the 2012 risk factors call.

A new paper titled “C9orf72 is differentially expressed in the central nervous system and myeloid cells and consistently reduced in C9orf72, MAPT and GRN mutation carriers” has been published in Acta Neuropathologica Communications. It was partly funded by JPND through the RiMod-FTD project, which was selected for support in the 2012 call for research projects for the identification of genetic, epigenetic and environmental risk and protective factors for neurodegenerative diseases.