For more than 20 years, the Meeting Centres Support Programme has been offering people in the Netherlands who are living with dementia and their family carers specially designed support as they adapt to life with dementia.

Developed by Professor Rose-Marie Dröes of the department of Psychiatry at the VU University Medical Center in Amsterdam, the programme – designed for community-dwelling people with mild to moderately severe dementia – has been implemented in more than 140 centres across the country, where academic assessments have indicated that the initiative has been effective: participants have exhibited fewer problems related to behaviour and mood, as well as higher self-esteem; carers have been shown to feel more competent in caring; and admission to residential care homes has been delayed, suggesting that the programme may also be cost effective.

In 2014, Dröes teamed up with an international group of researchers, all members of the INTERDEM network*, in a JPND-supported project called MeetingDem to test whether and how the model could be successfully implemented in three other European countries: Italy, Poland and the UK. Could the concept be tailored to the local cultures, social systems and specific needs of people living with dementia in these countries? Two-and-a-half years later, JPND checked in with partners in each country to see how the project was progressing.

‘A sense of security, self-esteem and belonging’
Three days a week, from mid-morning to mid-afternoon, people living with dementia in Droitwich Spa, England — a town about a three-hour drive west of London — gather with their carers at a local community centre. Here, at the first meeting centre opened by the MeetingDem project, staff and trained volunteers lead participants through a programme of planned activities. Sometimes they partake in dance, other times they engage in reminiscence activities. A local history group meets for discussions. Often participants shop for and prepare lunch together. Carers join in or meet with other carers. Above all, the meeting centre aims to engender an atmosphere that is kind, inclusive and, perhaps most importantly, enjoyable, according to Professor Dawn Brooker, who directs the University of Worcester Association for Dementia Studies and leads the UK arm of the MeetingDem project. “Everything that happens at the meeting centre is strategic and carefully devised to build confidence and social connections, but in a way that feels fun and effortless,” Brooker said.

The MeetingDem researchers say that meeting centres can help participants acquire essential new skills they will need to cope with living with dementia, such as learning to talk openly about personal challenges and asking for help. Dröes gives an example: “One of the carers told me that she and her husband had never openly talked about living with dementia, but now that they joined the meeting center this has changed. ‘He talks to me, isn’t that wonderful!’ she said to me.” The meeting centres have also been shown to help participants recover skills. Brooker recalls one woman with dementia who had stopped doing many things for herself. One day, after they’d been attending the meeting centre at Droitwich Spa, her husband was outside cleaning the car when he noticed that she was standing behind him holding a cup of tea that she had made for him — for the first time in three years. “She was able to regain those skills that she’d lost, and reclaim a role for herself as someone who made tea,” Brooker explained. “This sort of thing makes a big difference in how people feel about themselves and live day to day, so we think it’s critical to help participants maintain skills, as well as to be exposed to new experiences that will keep them stimulated and active.”

Above: Participants partake in activities at a meeting centre opened by MeetingDem in Poland.

In Poland, where the MeetingDem project has opened two meeting centres, demand quickly exceeded expectations. “The registration list to participate in the first meeting centre in the country was full within two weeks,” said Professor Joanna Rymaszewska of Wroclaw Medical University and the Polish project lead. “The waiting list now has more than 80 people on it, which we think reflects the huge need for day care activity centres in Poland.” Rymaszewska notes that participants in the Polish meeting centres have so far reported high levels of satisfaction. “Meeting Centre is a place that gives us a sense of security, self-esteem and belonging to a great group of friends,” one participant wrote to the Wroclaw centre staff. “Thank you for your support, care and hard work in preparing the place and the team that allows us to grow old happily and to deal with the consequences of our disease.” 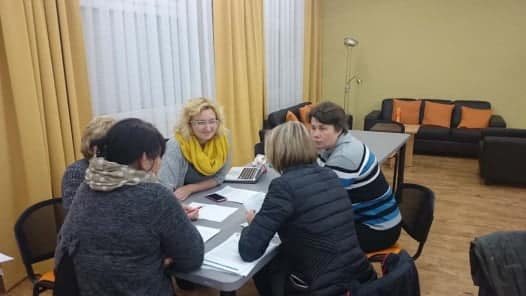 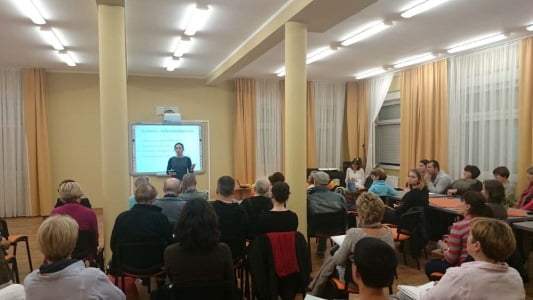 “Everything that happens at the meeting centre is strategic and carefully devised.” Scenes from a meeting centre opened by MeetingDem in Poland. Above: Training course for personnel; Below: Carers participate in an information session.

The challenges of importing an outside model
In the early stages of the MeetingDem project, the researchers in each country focused on potential partnerships, locations and financing, as well as developing and prepping the core teams at each local centre. This meant translating the Dutch-language materials, including a flyer, implementation guide and course for personnel, in each country, developing a ‘train the trainer’ course and course for staff to ensure that they were well equipped for launch and designing a PR plan to attract participants.

Overall, the researchers report that the challenges they faced in implementing the Dutch model in their own countries were in the fine detail rather than the broad approach. In the UK, for instance, the researchers worked on translating the materials from formal English into a more common, colloquial English that would be more accessible in the community. In Italy, the researchers found that integrating the model into existing programmes in the region was the biggest challenge. By contrast, in Poland, researchers said that the main challenges were dealing with thorny financial issues, which were intertwined with health care and social services in the country, and settling on a location and an organisation to keep the meeting centre running after the project ends.

For those also thinking about adapting foreign models of care, Rymaszewska advises allowing sufficient time to adjust the programme to specific country conditions. “Fortunately, this was the case in the MeetingDem project, which built in a first phase, over a year and half, to adapt the program,” she said. “Given the success we’ve seen with the project so far, we think that this methodology is very effective.”

Based on his experience in Italy, Chattat agreed. “I think that looking to efficient health care solutions is a very good starting point, even if implementation in another country requires tailored strategies,” he explained. “That means that when implementing the core programme, it’s important to stay flexible and to consider differences of culture, regulations, organisation and existing health and social care.” 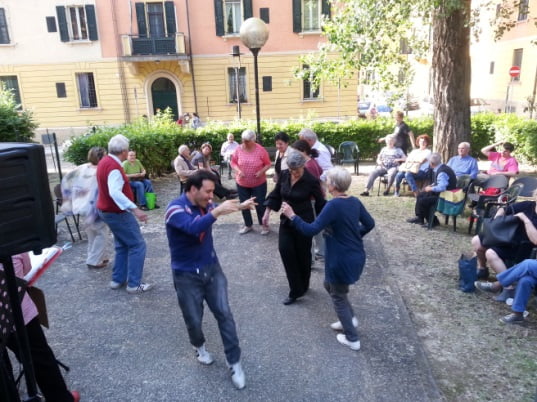 Participants are “exposed to new experiences that will keep them stimulated and active.” Members participate in activities at the “Margherita” meeting centre opened by MeetingDem in Italy.

Next steps: Evaluating the model’s effectiveness
Now that the meeting centres have been implemented at multiple sites in each country, the researchers will turn their focus to evaluation. Replicating an earlier Dutch study, each country will compare couples using the centres with couples in a control group of ‘usual care’ on a number of different criteria, including quality of life, depression, confidence and other service use. “Data on the efficacy and cost-effectiveness of meeting centres will be critical,” Chattat said.

It’s too early to report any findings — the results will be available after the project ends in 2017 — but based on progress to date, the project partners are sanguine about the benefits of international collaboration and the possibility of adapting approaches that are effective in one country for implementation in another country.

“I’ve worked internationally for many years and I think all post-industrial nations are facing many of the same issues,” Brooker said. “If you have something that has been shown to work well in one country, it doesn’t make sense to reinvent the wheel. To the contrary, it makes absolute sense to learn from other countries’ experiences.”

*Interdem is a pan-European network of researchers collaborating in research on and dissemination of Early, Timely and Quality Psychosocial Interventions in Dementia aimed at improving the quality of life of people with dementia and their supporters, across Europe.

MEETINGDEM (2014-2017) is led by the VU University Medical Center in Amsterdam and focuses on establishing Meeting Centres in the UK, Italy and Poland and evaluating the impact of these Centres on people with dementia and their carers.