To mark the half-way point of the three-year projects funded in 2015 for the JPco-fuND call, the project coordinators of the 21 projects met for a two-day symposium in The Hague to learn about each other’s work, strengthen existing ties and build new relationships to further enhance research into neurodegenerative diseases. This meeting was a unique opportunity for each researcher to discover the wide variety and the cutting-edge level of the projects, raising new perspectives for all of them.

The researchers, whose proj 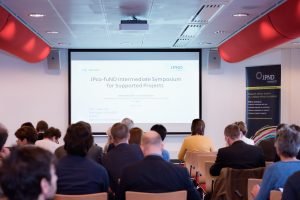 ects focus on diseases ranging from Alzheimer’s and Parkinson’s diseases to rarer maladies such as Huntington’s disease, ALS, SCA3 and PolyQ, were invited to give brief seven-minute presentations on their work. The presentations were followed by lively Q&A sessions moderated by JPND representatives including Thomas Gasser, Myrra Vernooij-Dassen, Philippe Amouyel and Jesus de Pedro.

The scientific sessions were complemented with an informative seminar on data management and data sharing.  The seminar highlighted the importance—and the difficulties—of collecting, storing and sharing data. The second day featured a presentation of JPND’s most recent tools, the Experimental Models in Parkinson’s site, the Global Cohort Portal and the research funding database.

After each of the four scientific sessions, participants had the chance to network during coffee breaks and meals, as well as tour the poster presentations given by a young scientist from each consortium. “The role of JPND is to bring together scientists to encourage the cross-pollination of ideas and to favour new collaborations, allowing them to share the latest advancements in their fields and build relationships that will strengthen their research now and in the future,” said Philippe Amouyel, Chair of JPND. 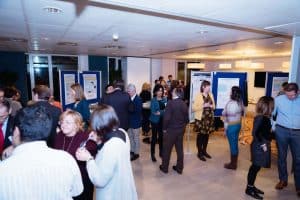 Whilst several project consortia are already collaborating, the Symposium offered participants a host of networking opportunities, as well as a unique chance to get a glimpse of each other’s work and progress and encouraged researchers to further explore new ways to collaborate and connect.  As a result, the Symposium proved to be an enriching experience for all. The Final Symposium, where each project will report on the final results of their three years of work, is slated to take place in 2019.

To learn more about the progress of the JPco-fuND projects, read the presentation abstracts here.